RICHMOND – Evelyn Swantek couldn’t have imagined what her day would be like when she awoke on Aug. 8 of last year.

Dressed in shorts and a T-shirt on a seasonably warm summer morning, Swantek went for a mile run as part of the training that all varsity volleyball players at Richmond High School were expected to complete.

Near the end of her run, Swantek noticed something wasn’t quite right. A bit of fatigue, yes, but it was more than that. She went home and told her father, Dave Swantek, that she was going to take a nap. But when she awoke, her world changed dramatically.

“It came out of nowhere,” she said. “I woke up and couldn’t talk. Part of my face went numb and I couldn’t see out of my right eye. And my neck was really big.”

A bit dazed by the sudden physical change of the youngest of his three daughters, Dave Swantek drove her to the hospital not knowing what was wrong.

Thankfully, Dave was home on a vacation day while his wife, Julie, was at work. He was attending to a couple of odd jobs around the house when his daughter came home.

“Evie came in and said she was tired, and wanted to take a nap,” he said. “She got up and came downstairs; immediately I knew something was wrong. It’s something, as a parent, you just don’t want to see.”

The Swanteks arrived at McLaren Hospital in Mount Clemens and, after the diagnosis, were told that Evie had developed blood clots – one in her throat and one in her face, and that she had suffered a Transitory Ischemic Attack (TIA), commonly known as a mini-stroke.

Dave Swantek said the doctors immediately took his daughter off the blood-clotting medication she had been taking since January.

On New Year’s Eve, 2016, Evie experienced abdominal pain while celebrating the arrival of the New Year with family members. She was taken to McLaren Hospital, where exploratory surgery was performed and she was diagnosed with endometriosis. Endometriosis is a condition in which a layer of tissue that normally covers the inside of the uterus grows outside of it. One of the main symptoms is pelvic pain. 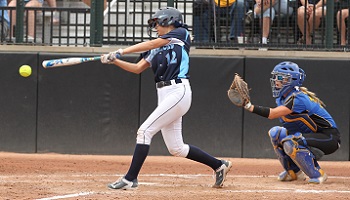 At the time, the Swanteks never gave it a second thought. Evie took medication, didn’t miss a day of school and continued to compete on the varsity basketball team. After that season ended, Evie made the varsity softball team for the first time and was named the starting catcher by coach Howard Stuart. Richmond won the MHSAA Division 2 title in 2016, and the Blue Devils reached the championship game again in 2017 only to lose to Ida, 8-4, in nine innings in the Final.

Seven weeks later, the Swanteks’ world turned upside down. And it would take nearly three months for their world to be turned right side up.

“It was a warning sign,” Dave Swantek said of the blood clots and the mini-stroke. “The medication she was on was clotting. Then they took her off of it. It gave us time to find out what was wrong. And this went on for a long time.”

Not knowing the exact cause and the proper medication was disconcerting to the Swanteks.

“They had no clue,” Evie said. “I kept asking (the doctors) what’s wrong. They said they didn’t know yet. I was sitting in the hospital just thinking, this is scary.”

For about a six-week period, Evie was in and out of the hospital three or four times – doesn’t recall the exact number. The illness prevented her from competing in volleyball and basketball, and for a senior, that can be difficult to handle. She also can’t give the exact number of days of school she missed, but she does remember missing a couple of football Friday nights, which did not sit well with her. Evie was able to attend Homecoming, however.

All during this time one thought, one goal, weighed heavily.

“It was hard on my parents, too. It was frustrating.”

This frustration and uneasiness came to a head one evening while Evie was watching television.

“I started to have these chest pains,” she said. “I’m lying on the coach, and it’s starting to hurt real bad. And I have a high threshold for pain. I broke my wrist (glove hand) and played three more tournaments, so it has to be a lot of pain for me to do something about it. I had had these chest pains before, but this time it was really bad. I rolled up into a fetal position, it was so bad.”

Said her father: “I remember that. I rushed to (McLaren) hospital and the people in the emergency room looked at us and it was like, what now? It took them three days to find out. The doctors kept saying they don’t know.” 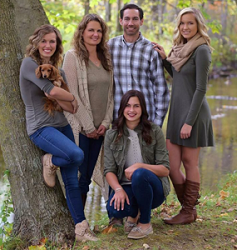 Dave Swantek said the doctors changed medication, from one blood thinner, taken orally, to one that was administered intravenously. In the end, that did the trick. Evie said she’s feeling better since the switch was made and the application, after a couple of tries, became second nature. She’s able to administer the shots by herself.

Dave Swantek gushes when he talks about how well his daughter has handled this situation. He said the doctors who have either diagnosed or treated Evie have offered to have a psychologist meet with her in an effort to make sure she recovered mentally from the ordeal.

“The coping mechanism she has displayed is amazing,” he said. “She’s been amazing through it all. She lost two sports – two sports she played her whole life. She loves volleyball and basketball. There were times they were throwing all kinds of medication at her, trying to find out what works. When they can’t tell you what’s wrong with your daughter, it’s a challenge. It was a rough time. She did a wonderful job.”

There is a happy ending. Evie is playing softball and expected to be one of Richmond’s top players. She’s down to one shot per day and she’s hoping, after she and her parents meet with the doctors April 26, that she will be taken off medication.

And her future looks bright on the diamond. She’s received a scholarship to Oakland Community College where one of her sisters, Ally, a sophomore, is a student.

“I’ve had the best support system you could imagine,” Evie said. “My parents, my family, have been so great. It’s been very comforting.”