EAST LANSING – Autumn Tubbs swears that “darn it” was as profane as she allowed herself to get.

The Coleman senior shortstop was visibly frustrated with herself after turning out of the way of an inside pitch with the bases loaded in the bottom of the sixth inning of a tie game. But one pitch later, none of that mattered.

“I should have let it hit me, but I didn’t, and it’s fine,” Tubbs said. “(I thought) this is an amazing opportunity for me to be able to hit the only two runs we got in, and get us hyped up to get three outs and end the game.”

Coleman (30-9) advanced to the Division 4 title game at 5:30 p.m. Saturday against Centreville. It’s the first trip to the title game since 2005 for the Comets, who won the championship that year.

“We got down to the semis last year, and every year has been another step, so hopefully we can get two steps in one,” Coleman coach Chad Klopf said. “It feels good.”

Coleman needed not just Tubbs’ heroics, but a gem from pitcher Faith Barden and the defense behind her to take this step. Barden struck out 11 batters while allowing three hits and two walks in front of a defense that committed just one error.

“We’ve always been a really good defensive team, and Faith knows that we’re always going to be behind her,” Tubbs said. “Faith’s played with us on travel ball leagues, and she’s always been our pitcher, we’ve always had to back her up. It’s just a nice opportunity to be able to have the opportunity to win a state championship with her on the mound.”

Rogers City (32-6) had just one runner advance to third base, and that came with two outs in the second inning and was immediately followed by a strikeout.

“That’s a good hitting team. That’s all we’ve been told, that they’ve been pounding the ball, scoring runs,” Klopf said. “(Barden) has been lights out for us the past couple weeks. She’s thrown all through the tournament; she’s done a great job. (Assistant coach Allison) McKibbin calling the pitchers for her and Kylie (Herkel) working behind the plate for her have done a great job, and she’s got a great defense that she can trust, and that makes it a lot easier to pitch when you’ve got a great defense.”

Barden had a strong day at the plate, too, with a pair of hits, including one to load the bases before Tubbs came to the plate in the sixth.

“Either way, I told (Tubbs) do what she wants to do,” Klopf said. “She knows this game in and out. She could easily be standing in that third base box someday and getting it done for her team, because she understands it. She knew with the bases loaded that there’s a run right there if she lets it hit her. She’s a solid ball player, she’s hit the ball for us and played well, so I had no problem with her not getting hit because I knew she was probably going to come through with a hit for us.”

Coleman didn’t get many chances to score, as the Rogers City defense made some spectacular plays to keep balls in the infield. The Comets did threaten to score in the bottom of the fourth inning, but the Rogers City defense again came up big. Barden, who opened the inning with a single, had advanced to third on an error and a passed ball. She was thrown out at home, however, when Rogers City perfectly covered a sacrifice bunt attempt. Amanda Wirgau fielded the bunt, threw the runner out at first, then covered the plate and tagged out Barden to keep the game scoreless.

“I thought our defense played outstanding today. We really made some nice plays,” Rogers City coach Karl Grambau said. “We made defensive plays good enough to win the game, but we just couldn’t get the bats going today. You have to credit their pitcher; their pitcher kept us off guard.”

Rogers City sophomore pitcher Kyrsten Altman had a strong game, allowing six hits and striking out one over six innings.

VIDEO: Coleman's Autumn Tubbs had this two-run single in the sixth inning to give the Comets a 2-0 lead.

For the first time in school history, Centreville (35-6) will play for an MHSAA softball championship. 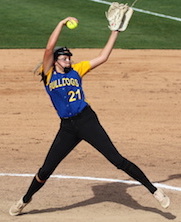 A marvelous pitching performance from sophomore Hannah Duchene and some heads-up base running keyed the Bulldogs, who were playing in just the second Semifinal in school history.

“It was what we expected – they’re a tough ball club and they’ve been here before and are much more familiar with this atmosphere,” Centreville coach Scott Logan said. “It hasn’t sunk in yet, I guess. They just keep playing, they keep playing hard and they play relaxed. They want to be here, and that’s a good thing.”

Centreville scored its first two runs on wild pitches, and blew open a tight game in the top of the seventh inning, scoring three insurance runs. The big hit in the inning was an RBI single from Joanna Larsen. Centreville scored one more run on a throwing error on the play.

The Bulldogs also had some defensive brilliance in a key spot. With a runner on second and one out, Centreville second baseman McKenzie Sheteron back-tracked to catch a fly ball in right field, then threw the tagging runner out at third to end the sixth-inning threat.

Duchene held the Patriots hitless through 3 2/3 innings and finished with eight strikeouts while allowing four hits and four walks. USA pitcher Katelyn Engelhardt had two of those four hits. Just one of the runs USA (31-9) allowed was earned.

VIDEO: Centreville's last two runs against Unionville-Sebewaing came on a wild play. Joanna Larsen singles to drive in MaKenzi Troyer, and McKenzie Sheteron would also score on the play on an error.