But she had started to reflect on how good her team’s season had been, win or lose.

After her Comets rallied for six runs over the final two innings to defeat Millington 7-6 and claim the school’s first-ever MHSAA Division 3 softball title, however, those thoughts went out the window.

“I’ll be honest, I was in the dugout thinking, ‘Win or lose, I’m proud of these girls, they played well, they hit the ball, they didn’t have any errors, they earned it,’” said Goodline, who is in her 19th season as Coloma coach. “Then we came back, and I forgot everything I said in the dugout.

"I’ve gotten a lot of Facebook things from former players, and it’s all because of them. These kids have seen those other teams compete and work hard and do what they have to do to be good. Softball doesn’t just begin in March in Coloma, and the players before them are what made this happen. I can’t emphasize that enough.”

The game featured the top two ranked teams in Division 3, and it showed, as they combined to both come up with huge hits, while also featuring spectacular pitching performances for stretches.

“I thought Coloma was a very good team,” Millington coach Greg Hudie said. “I felt like we were better, but we didn’t capitalize like we should have, and it bit us.”

Millington junior pitcher Gabbie Sherman put in a solid performance, striking out four batters and allowing just four earned runs. During one stretch from the end of the first inning through the fifth, she retired 14 straight Coloma hitters.

Coloma, meanwhile, used both of its pitchers, as Goodline started Jaidyn Hutsell, brought in Skylar Crisenberry to spell her in the fourth inning, and went back to Hutsell to close the game out in the seventh.

“We both bring different tools to the table, and we both rely on each other,” Crisenberry said. “I have so much confidence in her, and I think that’s how we switch in and out all the time, just having confidence in her. I would never be upset. I just wanted to win, and I knew Jaidyn had the tools to come in again and finish it off.”

Hutsell entered the seventh inning with a one-run lead and a runner on first base, but struck out the first two batters she faced. After a two-out single from Darrien Roberts, the Comets (38-3) intentionally walked Leah Denome, who had already tied a championship game record with four hits. The strategy worked, as Hutsell was able to force a groundout to shortstop Megan Koeningshof to end the game.

“I was very excited going back in,” said Hutsell, who had a pair of doubles at the plate. “Skylar did a great job keeping everything under control and not having any runners score, and I just came in and was confident.”

Crisenberry had pitched out of a no-out, bases-loaded jam in the bottom of the fifth inning to keep the Comets in the game and set up the final rally. After loading the bases, she followed up a strikeout with a popout and flyout to keep her team within four runs. 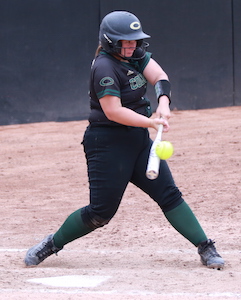 In the sixth, Coloma was able to make some contact against Sherman and capitalized. Hannah Mathis scored on an error, Hutsell smashed a double to centerfield to drive in Kayla Yore, and Morgan Taylor scored on a sacrifice fly from Mya Potter to pull the Comets to within one of the lead.

Sydney Bishop’s RBI double in the bottom of the sixth inning, scoring Denome, gave Millington (39-3) an insurance run heading into the final frame.

It wasn’t enough, however, as the Comets strung together three straight hits to start the seventh, and pulled to within one again when Megan Neubecker scored after a ball was bobbled in left field. Yore drove in the tying run with a sacrifice fly, and Wagner drove in the go-ahead run with a double to center.

“Megan Neubecker was the leadoff hitter, and I told one of my assistants, ‘You talk to her,’” Goodline said. “She’s a sophomore, she was nervous, she hasn’t been hitting real well – she hit well early in the season, then kind of hit a lull here – so I said, ‘You’ve got her, you talk to her.’ That hit was huge. It started it all.”

Hutsell had started the scoring in the game, driving in Koeningshof with a double in the first inning. Millington tied the game at 1 in the bottom of the third inning, when Roberts, who had tripled in the previous at-bat, scored on an infield single by Denome.

In the fourth, the Cardinals used a two-out rally to take control of the game, as an RBI single by Roberts was followed by a two-run triple by Denome. Her triple was the third of the game for Millington, an all-division championship game record.

That forced the first pitching change for the Comets, but the Cardinals managed another run as Denome scored on a wild pitch to make the score 5-1.

Hutsell finished the game with six strikeouts in 4 2/3 innings, while Crisenberry struck out two in 2 1/3.

Denome had three RBI for the Cardinals, while Roberts had three hits and one RBI, and McKenna Slough and Sabrina Gates each had two hits. Gates had one of the Cardinals’ three triples.

Millington, which entered the postseason ranked No. 1, could bring every player back next year, as there was not a senior on the roster.

“We haven’t really talked yet, but I just told them that this is still a huge honor, and to get some pictures with the trophy – I know they probably don’t want to,” Hudie said. “It’s a huge honor even to be runner-up, so I told them to make sure they don’t pass this moment up.”