Kim Maddox has an incredible feel for the game of softball. Growing up with significantly impaired hearing, that’s been a necessity.

Maddox, a junior slugger at Constantine High School who set her school’s season home run record in 2016 with 11 bombs, has already blasted 12 through 23 games this spring in playing a major role in the Falcons’ 22-1 record.

With the aid of cochlear implants she’s had since she was a small child, Maddox can hear, but she has to concentrate more than anyone else on the field. That is just one of many traits Constantine coach Marge Caid said sets her third baseman apart.

“She misses some things, but she does pay attention more than the others,” Caid said.

“I just look at the coach all the time,” Maddox said.

Precision and power are what’s obvious about Maddox, not any kind of disability.

“She is physically probably the strongest player I have ever coached. She has great bat speed, and her technique and her form are textbook. She works very, very hard and she is very dedicated to making sure that swing is perfect.”

Maddox fully expected to have this kind of year individually and as a team.

“We have good hitting, and this is a good team together,” she said. “I love my team. I have hitting lessons and I’ve been practicing and practicing. The biggest thing for me is to relax and then attack the ball.”

Like any good squad, success has been predicated on more than just individual talent. Constantine graduated some extremely skilled and productive players at the end of a 2016 campaign that set a record for wins in a season with a 32-6 record. The Falcons went 12-0 in Southwestern Athletic Conference Valley division play.

The loss of starting catcher Dylan King and hurler Bailey Potter to graduation didn’t slow the Falcons down. They have won 10 straight games since their lone loss of the year to a solid Three Rivers team.

Constantine has outscored opponents 247-29 and won by shutout nine times. In all, Constantine boasts five players hitting over .350, while its pitching has been effective and reliable. 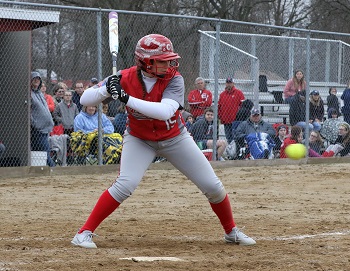 “We hit the ball well, which is our biggest strong point,” Caid said, “besides having a bunch of players who have been on the varsity team for quite a while.”

Caid hasn’t submitted information to the Michigan High School Softball Coaches Association for ranking purposes because she wants to see what her team is really made of down the stretch — which includes the toughest opponents of the year.

“We did play Paw Paw and Three Rivers, but other than that, I can’t justify tooting our horn that much,” she said. “We want to make less base-running mistakes, and a couple fielding things we need to work out.

The Falcons have a critical showdown with rival Schoolcraft today, which will likely determine the divisional championship. Schoolcraft is undefeated in Valley play after Monday’s pivotal sweep of Kalamazoo Christian. Both Schoolcraft and Constantine are 8-0.

“The rest of our season is going to be tough,” Caid said. “If we can’t play with these guys, then we’re going to be up a creek when it comes to Districts. We have to play ball and choke it out like we did last year.”

Constantine’s tremendous season in 2016 fizzled out with a Division 3 District Semifinal loss to Bridgman (9-1). This year, the District tournament includes familiar opponents in Galesburg-Augusta, Comstock, Kalamazoo Hackett, Schoolcraft and Parchment.

It certainly has taken a team effort to come back strong again this year and duplicate last year’s regular-season success.

Still, Maddox’s staggering numbers stand out in the crowd, especially considering she has another year of prep ball remaining. Maddox is hitting .589, which isn’t even the best average on the team. Kallie Sears, with 42 hits on the year, is operating at a .592 clip. Maddox was hovering around .700 before struggling at the plate this past weekend.

In 86 plate appearances, she has registered 43 total hits to lead the team. Of those, seven were doubles and three went for triples. She has 53 runs batted in so far and 38 runs scored. She also had a .640 on-base percentage and a 1.260 slugging percentage. Surprisingly, Maddox has been walked just 10 times.

“I hate being walked,” she said.

PHOTOS: (Top) Constantine players celebrate as Kim Maddox (15) crosses the plate to score a run. (Middle) Maddox eyes an approaching pitch during a game this spring. (Photos courtesy of JoeInsider.com.)