Kate Westmiller and her Marysville softball teammates proved a year ago what most coaches preach –rankings don’t matter.

The Vikings weren’t even an honorable mention entering the 2021 season, and entered the postseason outside of the top 10, before making a run to the MHSAA Division 2 Final.

Despite that run, and returning the vast majority of players from last year’s team, the Vikings find themselves outside the top 10 of the preseason Michigan High School Softball Coaches Association Division 2 poll.

“We’ve kind of always been used to that,” said Westmiller, a senior infielder. “You say ‘Marysville’ and people say, ‘Who’s that? Where’s that?’ But we definitely can compete. Last year, it was our own little Cinderella story. But it’s better to be the underdogs because nobody expects you to do well. We definitely hope we start to get on people’s radars a little bit.”

It’s a bit of a surprise the Vikings aren’t on the radar already after making their first Semifinal appearance since 2007 and first Final appearance since 1991. They’re received honorable mention in the preseason poll, but 10 of the 14 players from last year’s Final – an 8-5 loss to Owosso – are back.

“I wasn’t necessarily looking for the rankings, but a couple people sent it to me,” Marysville coach Ryan Rathje said. “We did lose some important pieces from last year, but we don’t really worry about (the rankings) because we can’t control it. We’re not going to lose any sleep over that, but it’s definitely motivation.”

The graduated losses – Kristen Smith, Calle Perrin and Mackenzie Smith – are certainly big ones. Both Kristen Smith and Perrin started the Final and had home runs. Kristen Smith also served as the Vikings’ main pitcher throughout last year, although the returning Megan Liniarski has plenty of experience in that regard, as well.

One unexpected loss was that of sophomore Avery Woodard, who is out for the year with an injury. Woodard was a starter for the Vikings as a freshman. 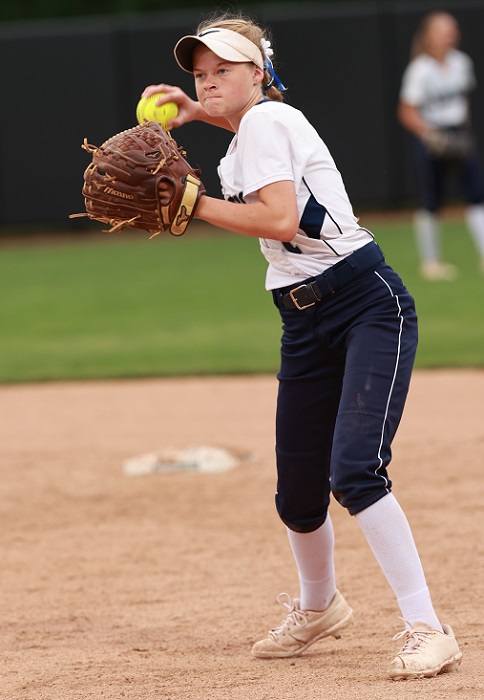 But that still leaves six starters from the 2021 Final – Westmiller, Kaitlyn Cain, Avery Wolters, Anna Oles, Brandi Bassett and Meghan Winston. When you add Emma Curtis and Kylie Parent, the Vikings bring back eight players who hit better than .380 a year ago.

“We were really surprised and excited with how we did last year, and we had a lot of important girls who left, and we’re definitely going to miss them,” Westmiller said. “But if we all work together, we can reach some of the goals we set. We want to try and win our District, and potentially win the Regional. In the (Macomb Area Conference White) we’re facing a little harder competition, as far as our league, but I think that will definitely help us during the postseason. During our postseason run last year, we were just so close, so I think one of the biggest goals is to become that close again.”

Marysville is 4-2 to start the year, and has battled the elements to simply get on the field. Rathje said that as of Monday night, he had not had one regular practice outside with his entire team.

While the weather has played the biggest role in that, Rathje and a handful of his players had a hand in it, as well.

The Vikings basketball team made its first run to the Division 2 Quarterfinals this winter. Rathje is also the girls basketball coach at Marysville, and five players – Cain, Winston, Oles, Wolter and Kara Miller – play on both teams. Ryan Quain, who also plays softball, joined the basketball team for the postseason.

“I think that’s a big credit to the girls we have,” Rathje said. “The girls are obviously athletic, hard-working and super smart. They don’t shy away from the moment. They know how to play the right way and just go out there with confidence. It’s been a lot of fun to be along for the ride with them. I’ve been blessed with some fantastic athletes.”

Rathje, who has been coaching both sports at the varsity level for 19 years, also gave credit to his assistant coaches, many of whom have head coaching experience in basketball or baseball/softball, such as Tom Valko, Ryan Biewer, Mark Dickinson and Shawn Winston.

That didn’t surprise Westmiller, who said her coach never shines the spotlight on himself, even though he deserves it.

“He’s taught me so much,” she said. “He’s teaching us life lessons and how to be better for your community and society. He’s helped me grow as a student and an athlete. He’s been a mentor for me. He’s very shy. He doesn’t like to take a lot of the credit for things. In reality, he’s doing a lot. He’s allowing us to come in early if we want to. He takes no time for himself – this man is so selfless. He’s amazing. I can definitely say he’s turned into an amazing mentor for me, and I will keep this coach/player relationship for the rest of my life.”

Westmiller and several of her teammates have just one season left with Rathje, and they’re hoping to end on another high note. Having done it before, together, certainly should help.

“These girls in volleyball and basketball and softball last year, I think that no moment is too big for them,” Rathje said. “That’s a really big part of it. A lot of times, it’s mistakes that are the difference in those games. I always tell them to go in there and control what you can control. I think that experience is priceless, and to have that confidence that they have, you can’t really duplicate that.”

PHOTOS (Top) Kaitlyn Cain sprints to first base during last season’s Division 1 Final against Owosso. (Middle) Kate Westmiller, here warming up before the start of an inning last year, is another key contributor back for the reigning Division 1 runner-up. (Click for more from Hockey Weekly Action Photos.)