EAST LANSING — Something had to give Thursday morning.

And if Macy Irelan had anything to do about it, it wasn’t going to be her and her Owosso teammates.

Irelan threw seven stellar innings, striking out eight while allowing just a single run in the Trojans’ 2-1 victory over Gaylord in a Division 2 Semifinal at Secchia Field in East Lansing.

Prior to this season, the Trojans had never made it past a Regional. Now head coach JoEllen Smith’s team is a win away from the program’s first-ever Finals championship.

“Everything beyond Regionals is a first, first, first for us, and the girls are handling it unreal,” said Smith, who’s in her 38th year leading the program. “The girls are coming in upbeat, not nervous. Today we came in and knew we were facing a younger team, and we had to show them that we’re not nervous.”

In fact, it was Smith’s game plan to put all the pressure on the Blue Devils, who were also attempting to reach their first trip to the Final. Owosso did just that, scoring a pair of runs in the second inning.

Sophomore Jamie Maier and senior Karley Kincaid opened the inning with back-to-back singles. After a sacrifice bunt from junior Kendall Anderson moved the runners to second and third base, Maier scored on a wild pitch to make it 1-0. Sophomore Sydney Somers then had an RBI single, scoring sophomore Brielle Sovis who was on as a courtesy runner.

“We don’t usually score early. It usually takes us two, three times through the lineup,” Smith said. “That was huge for us to get those two runs.”

They proved to be more than enough for Irelan, who didn’t allow a base runner until the fourth inning and a hit until the fifth. The junior, who has committed to Kent State University, allowed just three hits while improving to 35-3 on the season.

The only run she allowed came in the seventh inning, when the Blue Devils had the game-tying runs on base with just one out. Kincaid, the Trojans’ catcher, threw out a runner at second base for the second out. Freshman Braleigh Miller scored on the play to make it a 2-1 game.

“The run didn’t mean anything,” Smith said. “We throw through, get the out and there’s two outs with nobody on. We don’t run that play too often. Karley doesn’t throw much, so that (play) is bigger than you think.”

Gaylord had also put two runners on in the sixth inning, but Irelan pitched her way out of trouble. Blue Devils freshman Avery Parker’s one-out bloop single got things going for her team. A two-out fielder’s choice error gave Gaylord runners on first and second base. But the threat came to an end when Owosso’s Reese Thayer pulled in a deep fly to left field.

“When I get a runner on, I get up. I’m more focused,” Irelan said. “I want to get the batter out. And I know the girls behind me will make the play. In pressure situations, I work hard for my team because I know they’re working hard for me. I don’t want to let them down.”

Somers finished with a pair of hits to lead Owosso (36-3), who will now face Marysville (30-6) in Saturday’s Division 2 Final. Senior Reyn Tuttle and freshman Lexi Hemker also had two hits each in their team’s win.

The future looks bright for Gaylord, which had six freshmen in its starting lineup. That group includes the pitching duo of Avery Parker and Jayden Jones, who each had earned-run averages under one and combined for a 28-2 record this season. The pair allowed just two runs while scattering nine Owosso hits. Parker and fellow freshmen Addison Wangler and Taylor Moeggenberg collected Gaylord’s hits in the loss.

“It was a great performance for seven innings, but the jitters showed up in the second inning,” Gaylord head coach Abe Cruz said. “We fought, we fought and we fought but we just couldn’t manufacture that run until the last inning. They were there for us, we just came up one short.”

The Blue Devils have no seniors on the roster and 11 of the 15 players are just freshmen and sophomores.

“We’re looking forward to coming back already,” said Cruz, whose team finished the season 41-2. “There’s going to be more years to come, where this stage isn’t as big as it was today. We’ll get used to it. They’ll grow with maturity and be ready to come back next year.”

Marysville entered the Division 2 Semifinals as the only unranked team left in the MHSAA Tournament. But the Vikings put forth a brilliant display in all three phases of the game against eighth-ranked Chelsea and earned a spot in the Final. 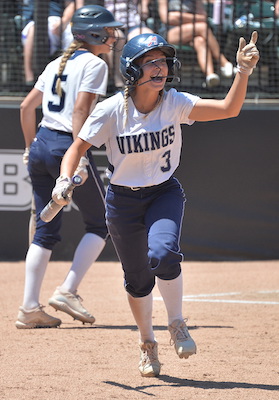 “She’s got the heart of a champion inside her,” Marysville head coach Ryan Rathje said. “She’s not afraid of challenging hitters. She works nice and fast, and our defense is ready behind her. When they did put the ball in play, our defense did a great job backing her up.”

The Vikings scored one run in both the first and fourth innings, but it was a five-run outburst in the third that broke the game wide open. They had six hits in the inning, including RBI singles by senior Calle Perrin, juniors Kaitlyn Cain and Anna Oles and an RBI double by freshman Avery Wolters. Marysville stretched its lead to 6-1 and never looked back.

“The difference was that five-run inning,” Chelsea head coach Jeff Connelly said. “They did a great job. They put the ball in play, and their pitcher did a fabulous job of keeping us off balance all day. The shots we did hit, they were always right at people.”

Junior Kate Westmiller had three hits and Wolters and Perrin each had two to lead Marysville (31-6), which will face Owosso at 10 a.m. Rathje said he’s excited to have an opportunity to face the Trojans, but knows it’ll be a challenge for his team to face Owosso’s Irelan in the circle.

Chelsea finished with a 37-5 record. Junior Margaret Olaveson collected a pair of hits to lead the offense.

“Our kids didn’t quit. We had one rough inning, or it’s a different game,” Connelly said. “We came in with the attitude that the girls have done as much in our community as we’ve done in 15 years. It was kind of our goal to get the program back, and the kids did it.”