EAST LANSING – When Richmond senior pitcher Shea VanScoter opened the bottom of the first inning of Friday’s Division 3 Semifinal against Clinton with a leadoff home run to left field, it figured to be enough run support for the way she has been pitching of late.

It wasn’t quite all the support VanScoter needed, but it was close.

Once again getting it done at the plate and the circle, VanScoter homered and tossed a five-hitter to lead Richmond to a 5-1 win.

The Blue Devils (30-5) advanced to meet Buchanan in Saturday’s Division 3 Final in what will be Richmond’s first title game appearance since it made back-to-back appearances in the Division 2 championship games in 2016 and 2017, winning the first and finishing runner-up the second.

It was actually noteworthy that Clinton scored Friday, given Richmond entered the game having yielded only five runs during the entire MHSAA Tournament and just one over its previous three games.

“We’ve had several shutouts on our road to get here,” Richmond head coach Howard Stuart said. “We pitch well, we play solid defense and we hit well.”

After striking out 12 in a Regional championship win over Millington and 14 more in a Quarterfinal win over Shepherd, VanScoter didn’t quite rack up the strikeout total against Clinton, only fanning four.

But VanScoter didn’t walk anyone, nor did she allow Clinton to string hits together, trusting her defense to make plays behind her.

“They were probably some of the best hitters I’ve faced all year,” VanScoter said. “They hit everything. They got their bat on everything. None of them really swung and missed.”

Two batters after VanScoter’s first-inning homer, Richmond sophomore Piper Clark hit a solo home run of her own to left to give the Blue Devils a 2-0 lead.

The score remained that way until the bottom of the fifth, when Richmond took a 4-0 lead on a clutch two-run single with two outs by Makayla Revord. Lauren Ziza then followed with an RBI single to make it 5-0 Richmond.

Clinton cut the lead to 5-1 in the sixth inning on a two-out single by Ava Ormsby, who brought home Liberti Fair after Fair had doubled.

But that would be all the offense for Clinton, which finished its season 34-8.

“Our goal was to put the ball in play,” Clinton head coach Kim Phillip said. “VanScoter averages anywhere from 12 to 15 strikeouts a game, and we didn’t want to do that. We really put in the work offensively. I’m proud of my girls for putting the ball in play. That was our goal.”

After making its first Semifinal appearance since 2006, Buchanan will now return to Secchia Stadium to play in its first championship game.

The Bucks rode a 15-hit attack to a 9-4 win over Standish-Sterling. 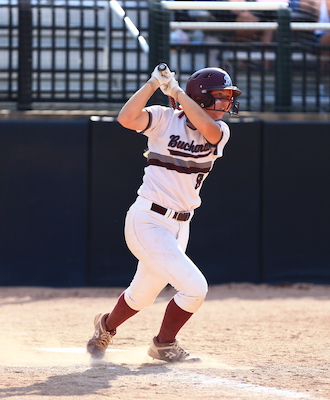 “Our baseball team was here (playing in Thursday’s Semifinals), so some of our kids came up here and I think that was helpful,” Buchanan head coach Rachel Carlson said. “We got up here early enough, and that calmed our nerves. We got to watch a little ball and settle in. They believe in what they are doing right now.”

Buchanan (36-4) opened the scoring with a big second inning, sending nine hitters to the plate and scoring four runs on five hits to take a 4-0 lead.

Hannah Tompkins and Hannah Herman each had RBI singles, while Kamille Lemon and Brooke Atkinson each brought in runs on fielder’s choice groundouts.

After Buchanan scored an unearned run in the third inning, Standish-Sterling got on the board in the fourth on an RBI sacrifice fly to right by Many Ahleman to make it 5-1. Buchanan got that run back though in its half of the fourth inning on an RBI single by Hailee Kara that made it 6-1.

The Bucks added three more runs in the fifth inning on an RBI double by Lemon, an RBI single by Sage Pruett and an RBI sacrifice fly by Atkinson to take a 9-1 lead, but Standish-Sterling answered in the sixth.

The Panthers plated three of their own to cut Buchanan’s lead to 9-4, with the big hit a two-run single by Kylie Wendel.

However, Buchanan pitcher Sophia Lozmack pitched a scoreless seventh inning to end any hopes of a Panthers rally.

Kara, Alea Fisher and Camille Lozmack each had three hits to lead Buchanan.

Standish-Sterling (32-12) was potent offensively as well, with 12 hits, but the Panthers couldn’t generate runs like Buchanan did.

Karasyn Kraska went 3-for-3 with two runs to lead Standish-Sterling.

“We don’t give up,” Standish-Sterling head coach Rich Sullivan said. “We were down 9-1 and a lot of teams would’ve quit, but we didn’t. About a month ago, I named them the cardiac kids because they don’t quit. You saw that with how they fought, and I told them I was proud of them.”