EAST LANSING – Before Rudyard senior Morgan Bickel stepped to the plate with one out in the bottom of the ninth inning of a tied Semifinal against Holton on Friday, she got some advice from her coaches in the dugout that seemed a bit perplexing.

“My coaches were like, ‘Just hit a home run and we win,’” said Bickel, who entered that at-bat with just two home runs on the year. “I just kind of laughed it off. I was just looking for solid contact. Something off of the barrel.”

Seconds later, Bickel indeed made contact off of the barrel and went from laughing off the advice of her coaches to walking it off for Rudyard, blasting the game-winning home run over the fence in right to give Rudyard a stunning 9-8 win.

Holton held a 7-1 lead with two outs in the fifth and before the Bulldogs improbably rallied to advance to their first Final on Saturday.

“We haven’t been down 7-1 and come back (this year), but we know we are a team that can score runs,” Rudyard head coach Stephen Davis said. “We never once panicked.”

Rudyard (28-5) started its rally in the fifth inning when No. 7 hitter Tori Tremblay and No. 9 hitter Chesney Molina each walked to set the stage for leadoff hitter Paige Postma, who injected some life into her team by hitting a three-run home run with two outs to left-center to cut Holton’s lead to 7-4.

Each team scored a run in the sixth inning, and then Rudyard scored three runs with two outs in the bottom of the seventh to tie the game at 8-8.

Molina walked to start the inning to turn the lineup over, and then with two outs, Bickel and Meagan Postma each hit RBI singles to cut Holton’s lead to 8-7.

Karlee Mayer then hit an RBI double to right-center just out of the reach of Holton’s diving right fielder to tie the game at 8-8.

In the top of the eighth, Holton loaded the bases with one out, but Bickel got out of the jam with a groundout and subsequent force at home, and then a strikeout.

After a scoreless eighth, Bickel retired Holton in order in the top of the ninth to set up her heroics.

“It was just funny at that moment that the coaches said to hit a home run, and I ended up doing it,” Bickel said.

Holton (35-7) seemed to be in cruise control after building a 7-1 lead, scoring a single run in the first, four runs in the second and single runs in the third and fourth.

But ultimately, some untimely walks and not producing enough offense in the late innings proved too costly.

Abigail Fowler and Madison Bosset each went 3-for-5, Gianna Reed went 2-for-2 with two runs scored and an RBI and Ryann Robins had three RBI to lead Holton.

“Hats off to them,” Holton head coach Kirk Younts said. “They hit the ball. It was a tight game, and they are a good team. They battled, and so did we. We had some chances to score, and we didn’t.”

Reigning champion Unionville-Sebewaing left no doubt from the beginning, jumping out to a 4-0 lead during the first inning and adding three more runs in the second to take a 7-0 lead en route to a 9-2 win. 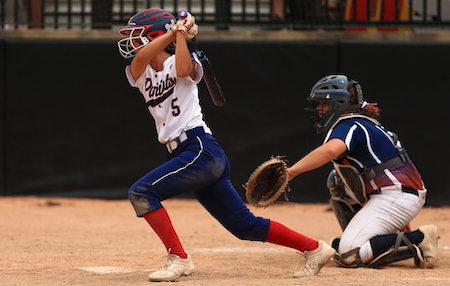 USA advanced to meet Rudyard in what will be the fourth Finals appearance for the Patriots since 2015.

“Putting four in the first inning kind of allows the girls to relax a little bit and slow the game down,” USA head coach Isaiah Gainforth said. “Coming back in the second inning and getting three maybe was even bigger.”

Laci Harris went 4-for-4 with two RBI and three runs and Gabriella Crumm went 3-for-3 with four RBI to lead a 10-hit attack for USA.

The offense was more than enough for USA starter Brynn Polega, who struck out 10 and didn’t give up an earned run in tossing a three-hitter.

Hannah Johnson had the lone RBI for Bridgman (39-3), which made its first appearance in the Semifinals.

“They knew what to expect,” Bridgman head coach Elaine Starbuck said of USA’s experience playing in later rounds of the playoffs. “Nerves I’m sure got the best of us. We gave up a few passed balls that allowed them to score, and their hitters are solid.”

PHOTOS: (Top) Rudyard’s Chesney Molina (12) slides safely into second base during her team’s victory Friday at Secchia Stadium. (Middle) Unionville-Sebewaing’s Macy Reinhardt (5) keeps her eyes on a drive during her team’s Semifinal win.