EAST LANSING — Coming up clutch is nothing new for the South Lyon softball team.

So when the Lions came up big on the sport’s biggest stage Thursday afternoon, it really should have come as no surprise to anyone at Secchia Stadium — least of all to head coach Dan DePaulis.

South Lyon rallied from two runs down, pulling away down the stretch en route to an 8-4 win over Grandville in a Division 1 Semifinal played at Michigan State University.

“Everyone contributed at the plate today,” said DePaulis, whose team will be making its first appearance in a Division 1 championship game. “It was awesome. We’ve come from behind before and played a tough schedule. We’ve been in a lot of tough games and played some tough teams. I think that prepared them. Nothing surprised them today.”

The Lions fell behind twice early. Grandville scored the first two runs of the game in the first inning, courtesy of an RBI double by senior Jamie Vander Meer and an RBI single by senior Kylee Dillard. South Lyon got two right back, one on an RBI single from senior Ella Vitale.

The Bulldogs then retook the lead, 4-2, in the third inning. Senior Maddie Gkekas scored on a wild pitch, with senior Brook Bernt then scoring on an RBI single by Dillard.

That’s the last run Grandville would score. South Lyon put two runs up in the fourth inning to tie the game, the first when Vitale singled in junior Julia Duncan, who crossed ahead of a tag at the plate.

“That’s a huge momentum shift,” Grandville head coach Troy Ungrey said. “I mean, we get that out right there, it’s the third out. It’s 4-2, we still have momentum. We’ve got the top of our lineup coming up.”

The Lions would add another run in the inning on an RBI single by senior Riley Bourlier, scoring Vitale. South Lyon then took a 5-4 lead in the fifth inning, when Duncan’s single scored senior Tierny Donnelley.

“We’ve been doing that all year, just having really good at bats,” DePaulis said. “They’re putting the ball in play, hard ground balls, getting the run in, productive outs. The seniors really stepped up for us today at the bottom of our order. They had some big hits to get us going early.”

“It’s kind of fun, we (seniors) are all like stacked at the bottom together so we can cheer each other on,” Vitale said. “I feel like our whole lineup can get hits. No one end is stronger than the other. One of our sayings is like, ‘Ground balls win softball games.’ When we have a runner on third, we try to hit it hard on the ground so they can score.”

“We had a team meeting the other day, and we talked about how we were doing it with two outs,” said DePaulis, who’s in his seventh year at South Lyon. “Those kids just come up clutch. Nothing phases them. They’re just really battling. At this point in the tournament, it’s more about what you’ve got between the ears than the talent. They really focused, they were mentally tough and they had really good at bats with two outs.”

Sophomore Emily Johnson had a team-high three hits and starting pitcher Ava Bradshaw went the distance, striking out 12 for the Lions (29-6-2), who advanced to Saturday’s Division 2 Final, where they’ll face Allen Park.

“We set a school record for wins this year,” Ungrey said. “Grace (Connelly) set a record for wins in the circle. Maddie (Gkekas) set the stolen base record. There are just so many good things to think about, all the way through. We brought up some sophomores at the end. They had a chance to taste this. I think in a couple years we’ve got a real good chance of coming back here.”

Allen Park played the patience game Thursday in its Division 1 Semifinal game against Farmington Hills Mercy. That’s not always an easy thing to do when your team boasts just one senior on the roster.

But it paid off for the Jaguars, who scored seven runs in the fourth inning to pull away from the Marlins en route to a 9-5 victory that clinched a spot in Saturday’s championship game at Michigan State University. 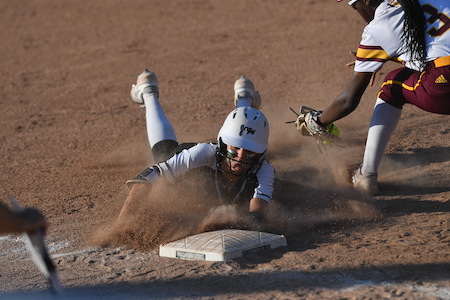 Junior Madilynn Ramey highlighted the inning with a grand slam, which broke a 1-1 tie and gave her team all the momentum it would need.

“The bases were loaded, and I knew I had to capitalize. I knew I had to come through for my team,” said Ramey, who finished the day 2-for-3 with her home run, a triple and a walk. “We’re the underdogs. We know we have to come out here and prove ourselves.”

Her head coach, Mike Kish, knew it was just a matter of time before his young Jaguars would break through.

“I believed. I absolutely believed,” he said. “We knew we had the talent. If we could just keep it close, long enough for us to take a deep breath and relax. And once we did that, this is what we do.

“(Madilynn) is our leader. She’s our shortstop. She’s our heart and soul. You know she’s going to come through. And sure enough she did.”

Allen Park batted around in the fourth inning. Sophomore Molly Hool singled to right-center to get things going. Junior Riley Kish and junior Autumn Bridges had a double and single, respectively, to load the bases for Ramey — who proceeded to clear them. The Jaguars added two more runs on an RBI double by sophomore Morgan Sizemore and an RBI single by sophomore Mia Hool.

The Hool sisters, along with Ramey and freshman Avery Garden, all finished with two hits. Allen Park (32-10) has a young roster which includes four juniors, five sophomores and five freshmen.

“We knew for a couple years that this talent was coming,” Kish said. “We only had three girls on the team who had played a varsity game before the season had started. We knew our pitchers were young, inexperienced. But we knew the talent was there. It comes out of potential.”

Mercy senior Grace Nieto finished 3-for-4 with four stolen bases for her Marlins, who finished the season 32-5. Senior Maggie Murphy and junior Kendall Spivey each drove in two runs in their team’s loss.

PHOTOS: (Top) South Lyon’s Julia Duncan is moments from connecting with a pitch during her team’s Division 1 Semifinal win Thursday. (Middle) An Allen Park runner gets to third base head first as Mercy’s Kendall Spivey gathers the ball for a possible tag.