The freshman showed unbelievable poise on the mound and led the Lions (30-6-2) to the Division 1 championship with a 5-0 victory over the Jaguars at Secchia Stadium.

She was in trouble only in the seventh inning, when Molly Hool led off with a double. But Bradshaw got the next three batters, striking out the last to clinch the program’s first Finals title.

“She’s got the fire,’’ said Allen Park coach Mike Kish. “She has Division I stuff and she’s only a freshman. She has the spin and a rise ball. It’s hard to lay off.

“We have a team that loves each other. We’ll be back. We’re a young team. We can’t let her win again. This was the first time both of us were here, and after the Semifinals I thought we were confident.’’

Bradshaw scattered three hits. She said getting a lead just allowed her to pitch.

“I was a mess last night (Friday),’’ said Bradshaw. “My rise ball was working for me. It was on and that obviously helps. I had a great defense behind me. Every ball that was hit, I knew it was going to be caught. When you have that kind of confidence in your defense, it’s easier to pitch.’’ 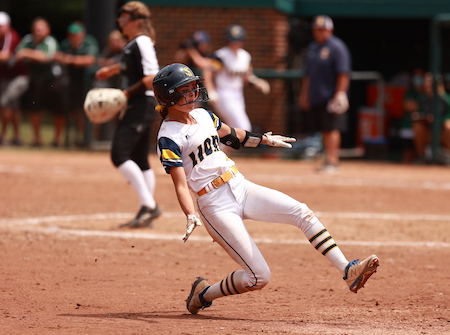 Bradshaw got the scoring started with an RBI double after Grace Walters reached on an error. Julia Duncan’s single scored another run to make it 2-0 in the first inning.

Not long after, the game went into a rain delay for 20 minutes, giving the Jaguars (32-11) a chance to regroup.

“She’s always a mess before a game,’’ said coach Dan DePaulis. “The way she trains, the way she plans for things. She’s a competitor. She attacks hitters. She’s just a really special kid.’’

After a rocky first inning, Allen Park pitcher Morgan Sizemore settled down and kept Allen Park in the game while the offense had a hard time solving Bradshaw, who pitched with minor stress.

She continually kept the Jaguars off balance and got great plays behind her. She also continued adding to the offense – after South Lyon loaded the bases on singles in the bottom of the fifth inning, Bradshaw’s sacrifice fly produced a run to make it 3-0.

The Lions tacked on insurance in the bottom of the sixth inning on a two-run double by Riley Bourlier.

“I thought we had a chance to do this after Regionals,’’ said Bourlier. “Ava is phenomenal, and it’s a pleasure to play with her.’’