EAST LANSING – Macy Reinhardt made the most of her final at-bat in a Unionville-Sebewaing uniform.

Reinhardt launched a shot to the top of the wall on a 3-2 pitch in the sixth inning to drive in a pair of runs and extend the Patriots’ advantage.

“I knew it was probably going to be the last at-bat of my career, so I put a lot of heart and soul into it,” Reinhardt said. “‘I’m just glad I could pull it together for my team. Honestly, this never gets old and it’s special to win another one to end my high school career.”

The Patriots continued their dominance in Division 4 and won their fifth Finals championship over the last seven years.

The title also was their third in a row.

USA coach Isaiah Gainforth felt like his team’s experience played a major role in the victory.

“If you get down here for the last weekend, it’s anyone’s tournament and we have experience,” he said. “That’s the one thing we have going for us, and I thought we used that to our advantage a little bit.

“This isn't just a three-month sport at our school. It’s all year, and they’re committed. When you're driven to win a championship, they'll do anything if they trust you – and our girls trust us.”

After three scoreless innings, the Patriots capitalized on a two-out throwing error by the Bobcats in the fourth inning. USA scored twice on the play to go ahead 2-0.

The narrow margin remained that way until Reinhardt’s clutch hit doubled the lead.

“Reinhardt getting those two insurance runs in the sixth inning was huge, just huge for us,” Gainforth said. “And once you go up four going into the last two innings you feel good, but always prepare for them to get a hit so you try to stay a step ahead.”

Senior pitcher Laci Harris pitched well for the second-straight day. She struck out nine and didn’t walk a batter. 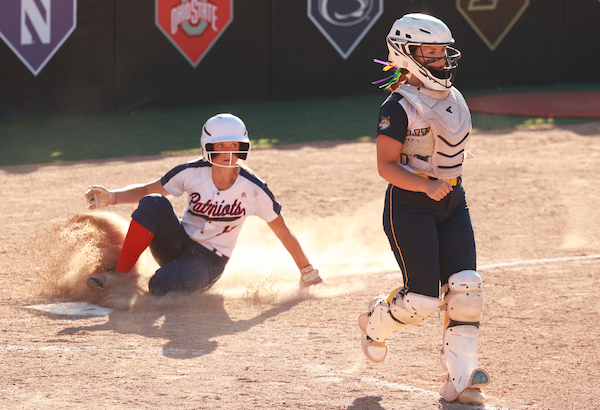 “This means a lot to me because the seniors are leaving history at our school by winning three in a row,” Harris said. “I wanted to win this last one as a senior, and Macy helped me a lot today. That was good for her, and I was happy for her because this was her last softball game.”

The Bobcats answered in the bottom of the sixth inning.

Junior Patrina Marsh doubled and sophomore Unity Nelson singled her in to trim the deficit to 4-1.

Whiteford had the game-tying run at the plate in its last at-bat, but Harris got a flyout to left to end the game.

The Bobcats were hoping to win their first Finals championship since 1987, but couldn’t break through despite out-hitting the Patriots 9-5.

“Two best teams in the state, without a doubt, and I felt like we were putting the ball in play and hitting it hard,” Whiteford coach Matt VanBrandt said. “To make it this far, you have to be really good. It takes a lot of talent and you just need a pinch of luck sometimes, too, and we just didn’t have it today.

“The girls fought hard all the way to the last out, and I couldn’t be prouder.”

Marsh, Alyssa VanBrandt and Kaydence Sheldon each had two hits to lead Whiteford, while Nelson fanned 11.