PORTAGE — Mikaela Kubiak is a fierce competitor on the volleyball court. But the Portage Central senior setter had an even harder fight off the court her first two seasons.

Kubiak, who has been instrumental in the Mustangs’ run to a 23-3 start and No. 5 ranking in Class A, spent her first two seasons rehabbing from injury.

A starter on varsity as a freshman and sophomore, Kubiak tore her anterior cruciate ligament in her left knee, not once but twice, and endured two separate stints of grueling physical therapy.

Looking back, the personable Kubiak remembers every detail.

“It was our first home match against Kalamazoo Central and all my family and friends were here watching,” said Kubiak, who came to Portage from Central as a freshman and whose father Bob Kubiak had coached Kalamazoo Central football from 1993-2003.

But her first home volleyball match wasn’t even close to what she envisioned.

“It was in warm-ups and the second ball I hit, I came down and I blew my knee,” she said.

“Not a very good start. It was our first home varsity match, and I think it was the first or second week of school.”

Her first thoughts were that she could walk it off and continue to warm up.

“Then I was like, whoa, this is way more serious than I thought,” she said. “I couldn’t get up. I kept walking, then I just sat down on the ground. It was throbbing and I was in pain.

“I was just super mad, super mad at myself that it happened. Of course, that game it would have to happen to me.”

She had knee surgery and spent nine months in recovery, including physical therapy at least three times per week.

“She is hugely determined and loves the sport. You can’t help but beat yourself up when you’re a coach and any kid gets hurt on your watch.”

After missing her first season, Kubiak was raring to go as a sophomore.

The team’s setter was Madison Jaqua, who earned all-state first-team honors that year, so Kubiak was once again a hitter.

“Madison set me a ball and I came down and just overran it too much and I blew it out again. I knew right away because my knee moved on me.

“I was like, ‘Oh great.’ I think I was even more mad at that. It was like a pin dropped in the room and I was so frustrated. I technically tore it twice in the same year. I actually tore it on 9-11 my freshman year and 9-9 my sophomore year.”

Once again, Kubiak missed the rest of the season. But this time she knew what to expect from the physical therapy and did a lot of work on her own to supplement the workouts.

Giving up volleyball was not an option.

“I was more comfortable going back my junior season because I was back in my original position (as a setter with Madison Jaqua graduating) and I had a huge brace on. I didn’t have a brace my sophomore year.”

“She was setting for us,” she said. “The biomechanics are way different. We didn’t have her play front row last year. She set from the back row. We ran a kind of modified system for that. 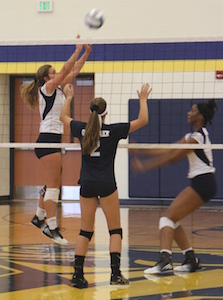 The coach’s daughter, senior Devin Jaqua, who has been playing volleyball with Kubiak since seventh grade, was not surprised she returned stronger than ever.

“She’s always been a strong leader, and she’s always worked really hard,” the senior said. “She has a really big passion for the game, so I knew she’d always come back.

“She leads almost like the team mom. You can always depend on her, and she always plays her best. She always knows what to do and when to do it.”

In November, she will sign to play collegiately with Division II Metropolitan State University of Denver.

“It’s all the components: her athleticism, her consistency, her decision making,” she said. “But at the end of the day, it’s about her will to want to win. She’s a great leader.

“She is a great problem solver. She’s demanding, but she does it in a very calming way. She’s very controlled. When things aren’t going well, she does a great job figuring out a different way to win. That’s her job.”

Devin Jaqua said this is a special year for the seniors.

“There’s five seniors, and it’s our last year,” she said. “Mikaela and Janell (Williams) are the only two so far going to play in college, so the rest of us really want to make it a memorable last year.”

Talking from experience, Kubiak offers some advice: “For any other volleyball players out there, work hard all the time because you never know when it can be taken from you.

“Cherish every moment you have on the court with your teammates because it really does fly by.”

Other seniors on the team are Rebecca Barnes and Maddie Goodman. Juniors are Maddie Wojcik, Sara Denison, Olivia Harning, MacKenzie Zook and Jessie Zesiger. The sophomore is Ryann Jaqua and the freshman is Maizie Brown.