At the end of her short speech prior to the match, Manore said to her players, “It’s about you the rest of the night. It’s not about me.”

Those girls already knew that. Just 17 days earlier, Manore broke the record held by retired Portage Northern and Delton Kellogg coach Jack Magelssen with win No. 1,833 of her career. But none of her players were aware of the record until a few days after the match.

“We found out a few days later,” four-year senior Isabelle Marciniak said. “We saw all the stuff in the media and in the paper, and we’re like, ‘What?’ She doesn’t go around bragging.

“She is not the type of person who will go around and say, ‘Hey, I’m about to break the record.’ She’s not like that. She is so humble about all of her achievements.”

When asked about the national milestone, she tried to shrug it off as not that big of a deal.

“The state is probably just as important because we can play more matches than most other states, so if you break the Michigan record, you have a good shot at the national record,” she said.

However, she conceded that breaking the record did present her with a little bit of personal satisfaction.

“I think that some of the satisfaction came from that it was Jack Magelssen’s record that I broke,” she said. “He was the Portage Northern coach, and that is who we emulated our program after.

“He was the first one in the state to be really good and knocked Bedford out of the state tournament for like 10 years in a row, and then finally, we got them in 1998 – we won our first state championship. The fact that he retired a couple of years earlier is what allowed me to pass him.”

No games to play

As a child growing up in Bedford during the 1960s, Manore was faced with the fact that organized sports were not a viable option for girls. And she desperately wanted to play.

“Everything I learned was in the back yard,” Manore said. “I had a dad who played catch with me. We went baseball, basketball, football and played them all. I had two brothers under me and a younger sister, and my dad was my best friend. We’d go out and play catch.

By the time Manore arrived at Michigan State University in the fall of 1971, she had developed into a decent athlete, and a twist of fate led her to volleyball. 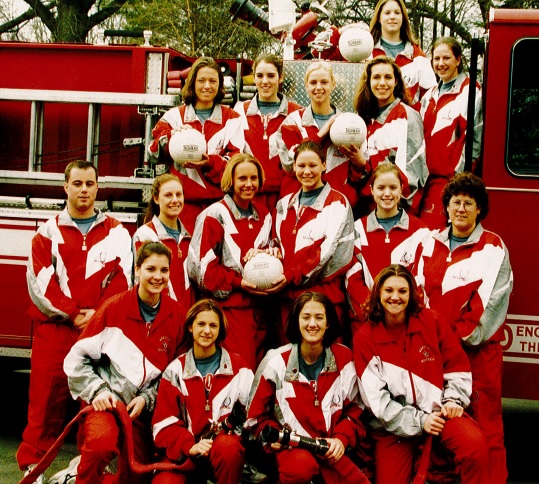 “I took a phys ed class in volleyball, and the varsity coach (Carol Davis) happened to be the teacher,” Manore said. “She said, ‘You’re athletic; why don’t you come out for the team?’ I went out and made it on my athleticism and played for four years.”

Manore didn’t know it at the time, but not only was that the beginning of a successful and record-breaking career, she was learning lessons on how to run a team at the same time.

After college, Manore was trying to find a teaching job when she spotted an ad in the newspaper. The University of Toledo was starting a volleyball program and needed a coach. Manore applied and landed the job. She was a college coach just fresh out of college.

“I was their first coach and only two or three years older than some of my players,” she said. “I just ran it like the college coach at Michigan State had done it. It was OK.

“My teams – we went into the weight room – and at that time it was unheard of for the girls to lift weights. Pretty early on, I happened to have a girl who could out-lift the boys. Other kids just kind of saw her lift like that and said, ‘Oh, we can do that, too.’

“One thing that has changed is that now it is so natural for girls to be in athletics. Back in the early days, it was like, ‘I’m not sure we’re supposed to sweat,’ and now they can perform better than a guy. My girls are like, ‘Yeah, we’re going to beat those football players in the weight room.’ ”

Four years later, Manore accepted the job as volleyball coach at Bedford, and from 1979-83 she coached both the Mules and Toledo. However, in 1983, Toledo volleyball became affiliated with the NCAA, which did not allow a coach to also be involved with a high school team. So she resigned as Bedford coach to remain at Toledo.

Going home to build a program

In 1989, Manore returned to Bedford, from which she had graduated in 1971. The school enjoyed a state power in wrestling under coach Bill Regnier, and Manore took some of his approach and applied it to her volleyball program.

The program really got rolling during the 1990s. Bedford appeared in the Class A Finals in both 1991 and 1992 and finished runner-up. Another second-place finish came in 1996. Bedford wanted to take the next step. The championship step.

After losing to nemesis Portage Northern in the 1997 semifinals, the players on the team who were not graduating made it their mission to win an MHSAA championship in 1998.

“In 1998, it was like we got the monkey off our back,” Manore said. “We had been close for a few years, and after losing in the semis in 1997, I found out later that when we got home, the juniors on the team got together and vowed that they were going to stick together, work hard and get it done.”

“Their goal all the way through was to win that state championship, so for them to really realize it was a neat thing.”

Obviously, Manore cherishes all of the wins and championships over the years. But she has received other rewards that are even more gratifying.

‘She’s not as scary as people think’

A coach with a résumé as strong as Manore’s can be intimidating to incoming players. Add in the fact that Manore is a disciplinarian, and it can be even more intimidating to a 15-year-old girl.

Yet, it is those relationships that Manore cherishes more than her record number of wins.

“Seeing young girls develop, seeing them go on to play in college – those who want to – and those who don’t play in college might do some other things, is very rewarding,” Manore said. “I guess having enough of them say, ‘You made me the woman I am,’ or ‘You gave me opportunities,’ or ‘I’m so disciplined in my working life,’ that’s just so neat to see. 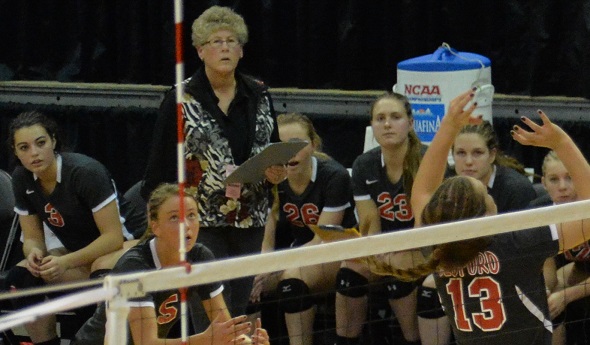 “These girls are confident and dedicated and overachievers. It’s just a neat thing.”

Yet, they don’t always see it that way early on in the program. Marciniak, the four-year senior this year, had two older sisters play for Manore, so she had sort of a head start on understanding her coach.

“Every player goes in scared of Coach Manore just because they know she has such a strong program, and we all really want to impress her,” Marciniak said. “But once you get to know her, she’s not as scary as people think she is.

“She is one of my favorite coaches I’ve ever had. She pushes the girls, and she knows what people can take. I guess I was kind of prepared because of my sisters, and they just kind of told me, ‘Don’t be scared of her; she wants to see you succeed, and she pushes you to succeed.’”

Marciniak flashed a big smile when asked if Coach Manore has a funny side.

“She cracks jokes all the time,” Marciniak said. “When you’re on the court or during practice, it’s all go, it’s time to prepare, it’s time to do work, but off the court, she cracks jokes all the time. Sometimes it takes us a second – like she does these little jokes where she makes fun of us, and obviously we can take it, and then takes us a second and then we start cracking up.

“She is a very disciplinary coach. She won’t brush things off like, ‘Oh, you’ll get it next time.’ She makes sure you know what you did because she wants you to be the best you can be. She pushes you, and she’s a very tough coach, but for Bedford volleyball, that obviously works very well for us.

“The thing I love about Coach Manore is that there are a lot of coaches out there who just worry about winning or worry about what goes on with the girls on the court, but Coach Manore loves us like we’re her daughters. She cares about every single one of us, and she wants the best for us on and off the court. She makes sure that we’re getting enough sleep and this and that and everything. She really cares about her girls.”

All of the success of the Bedford volleyball program has forced Manore, a self-described introvert, to become more vocal and take on larger responsibilities.

“I guess that is something that athletics has given me,” said Manore, who retired from teaching in February. “I was one of the shy kids in school. I had to be number one and top of the class, and I got my homework in, I did all of that. But I didn’t want to speak up.

“But I had to do that to do interviews and speak at banquets. I’ve served on MIVCA (Michigan Interscholastic Volleyball Coaches Association) board of directors for more years than I can count, and I’ve been on American Volleyball Coaches Board of Directors for six years, so just getting involved with people at the highest level, I had to speak up.”

And her latest public speech was Monday night, in front of family members, current and former players, school officials and parents of the players. In typical Manore fashion, the message was more about her players than it was her record.

“To all the wonderful young ladies that I had the opportunity to coach, you guys won the games; I didn’t do anything,” she said. “I just worked you hard in practice, made you hate me for a while and then you moved on.”

Marciniak spoke of what an honor it was for this year’s team to be the one to deliver the record-breaking win after it was set up by so many years of other teams and other players.

“It was a really cool feeling because she has given us so much, and we gave her that one win,” Marciniak said. “Obviously, she gave it to us beforehand.

“It is so awesome that we were able to give something back to her.”

PHOTOS: (Top) Temperance Bedford coach Jodi Manore instructs her players during the 2004-05 Class A Final. (Middle) Manore, far right, poses with her 1997-98 team, which won the first of the program's three MHSAA championships under her guidance. (Below) Manore oversees her players setting up a kill attempt during last season's MHSAA Semifinals.