BATTLE CREEK – As Miley Cyrus’ “Party in the USA” rang through the Kellogg Arena speakers Saturday, the Reese volleyball team put on a show.

The Rockets huddled up, sang and danced near their bench following the second set of their Division 3 Final against Monroe St. Mary Catholic Central. In isolation, it looked like the beginning of a celebration. With context, it was a team looking to regain its identity while in a 0-2 hole.

“It was just exciting. It was, I think, everything that people want to see when they come to a state championship game,” Reese coach Angie Compton said. “We definitely were not ourselves at the beginning, and we loosened up that third set and we just never looked back. It wasn’t pretty and it wasn’t perfect, and it wasn’t without our, ‘Oh no, are we going to do this?’ moments. But they’re just a great group of girls that just got the job done.”

The win denied SMCC a third straight Division 3 title, and ended with a back-and-forth final set, which began with each team going on a 5-0 run. The Kestrels took a 9-7 lead during the set, but, outside of the final tally, neither team led by more than one after that.

Reese (35-5-1) clinched the title on the second championship point of the night, as senior Maddi Osantowski and junior Abby Karst combined for a block.

“Honestly, I don’t even remember it,” Osantowski said. “I just saw her go up and I was like, ‘Whatever, let’s just try and block this girl and get the game over with.’ I was kind of in shock. That was my first block against her the whole game. It was great.” 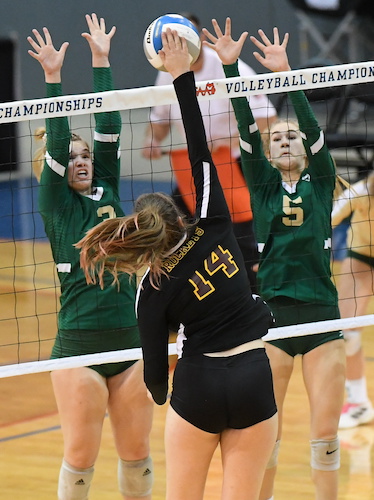 As the tension of the final set increased, Reese continued to stay loose, lining up as sprinters on the one side of the court as a timeout would come to an end, and faux sprinting across to the other side when the horn would blow. That joined a stirring rendition of “Living on a Prayer” and a team shadow boxing exercise during “Eye of the Tiger” in getting the Rockets into the proper headspace to come out victorious.

“I was like, ‘Everybody is probably judging us like crazy. Do they not care?’” Compton said with a laugh. “We expected to win. We came in thinking we could do this. We don’t think everybody else thought that, but we don’t care. We definitely care, especially in those moments, we care the most when we’re loosening ourselves up. When we’re dancing and getting loose, we know that’s how we play better. I know it looks weird, but it’s very important to our style of play.”

Also very important to their style of play is Osantowski, who finished with 34 kills and totaled 110 attack attempts during the match.

“I know that she will put it down when we need it to be put down,” said Dalak, who had 42 assists on the night. “It’s good to mix it up sometimes, too, because we need to get those blockers moving around.”

Dalak did switch it up in a crucial moment, ending a wild rally with a dump for the final point of the fourth set. Dalak also had 13 digs and six kills in the match, while Sarah Gray added 21 digs and six kills. Josie Johnson led the Reese defense with 29 digs, while Osantowski added 17.

While Reese was getting loose and gaining momentum, SMCC (36-12) was attempting to regain what it had in the opening two sets.

“A big part of it is, I tell them, ‘Take a deep breath, let’s focus on the things that we know,’” Kestrels co-coach Cassandra Haut said. “What do we know about the other side? Is the setter up, is the setter down? What do they normally hit in this situation? And we talk about the rotation we’re in. What’s our best hit? Any way to just kind of refocus on something else, not the nerves or anything else that you’re feeling.”

Senior Kate Collingsworth spread the wealth with her 52 assists for SMCC. Jessica Costlow had 22 kills, McKenna Payne had 21 and Audrey Cousino had 10. Payne also had 29 digs and four aces, while Costlow had 19 digs.

“I am super, super proud of my team and everything they’ve accomplished this year,” Haut said. “They persevered through a lot of different things, and we play a really tough schedule. And I think it shows with how hard we can push.”