Buchanan may never have another class of volleyball players like the one winding down its final high school season for the Class B third-ranked Bucks this fall.

In her 13th year coaching the team, Lisa Holok isn’t taking it for granted.

“They’re insanely special, said Holok, whose program has produced a number of college players over the years. “We’ve had our eye on this group since the eighth grade just because they are so special.”

Headlining the senior group is outside hitter Franki Strefling, who is headed to Eastern Michigan University next year on a full-ride scholarship. But she’s only one of seven seniors to have raised Buchanan’s profile over the last few seasons.

Buchanan did experience a disappointing Regional Semifinal loss in 2015 (swept in three) and a 3-1 loss in the Regional championship match in 2014 — both at the hands of Battle Creek Harper Creek.

But the Bucks, and this senior group in particular, think now is their time. They’re 33-3 and well seasoned after competing (and winning) some of the most talent-packed tournaments on the west side of the state and in northern Indiana.

“They all really love the game,” Holok said. “The communication between them is almost seamless. We always knew we could make a run. We expected it and we work for it. This summer when we had our workouts, it was a different feel. I think it was more of a sense of urgency for them just because it’s the final season.

Most of the Bucks’ regular-season matches in the Berrien-Cass-St. Joseph League in recent years have been tests of discipline. Winning by large margins, Buchanan had to manufacture competitions within competitions to remain engaged — not allowing another point after building a big lead, not committing service errors, not playing down to a lesser opponent’s level.

That hasn’t been an issue this year, however. Nor has needing extra motivation.

“Leaving regionals last year with another loss to the same team for the second year in a row, we knew we had work to do,” defensive specialist Taylor Reed said. “We set our goals high for our last time around. One major goal we set out for our team was to beat our rival, Harper Creek, which we've already accomplished in an earlier tournament in the season. Winning state, of course, is our overall goal.”

It has been a long road to finally be in the position to possibly achieve that goal. 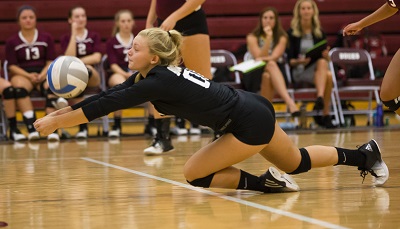 “Over the past four years, the seven of us have been through everything together,” Liz Kuntz said. “And when I say everything, I mean everything from heartbreaks and hard conditioning days, to devastating injuries. I'm so thankful to not only call them my teammates, but some of my closest friends.”

The personalities are as different as their roles on the court.

Strefling is the one who “keeps it real” and is willing to say the things out loud that might be difficult for her teammates to hear. But Kuntz said Strefling’s “impeccable” understanding of the game makes the advice easy to take.

Alex Tobler is a fierce competitor but is emotionally uplifting when her teammates need it. Setter Britta Mollberg rarely loses her cool as the offense’s quarterback.

Reed takes pride in bruises, and Taylor Strauss keeps everyone focused on daily and long-term goals. Andrea Blair doesn’t let anyone off the hook in practice, constantly pushing her teammates to be better. But she’s the first to provide levity when necessary.

“This team is what we like to call ‘The Dream Team,’" Reed said, “not because of our winning record, but more because of the chemistry we have. We know all of each other's strengths and weaknesses because most of us have been playing together from elementary YMCA ball to club and now high school ball. Five of the seven seniors we have now all started on varsity as freshmen.

“We know exactly whom we are playing next to, and it all just flows together. It's definitely an advantage to have this bond that not many teams can say they have.”

(Statistics prior to Saturday)