DETROIT – Eliana Bommarito will typically have the advantage in strength anytime she steps on the wrestling mat against another female.

At Saturday’s Individual Wrestling Finals, the Hartland senior drew strength from the crowd at Ford Field as girls joined the boys on the big stage for the first time in history.

Bommarito earned a fall over Belding freshman Madasyn Frisbie in 3:53 in the 255-pound title match to become a four-time state champion.

“I’m so proud. It means, like, we’re being recognized,” said Bommarito, who was 8-0 in matches against girls this season. “There’s actually more girls joining, and this will only encourage more and more females to start wrestling and know that they have a chance to be recognized for it. It’s just great that I got to see that my last year.”

Bommarito said she picked up wrestling about six years ago. She’s been a state champion more than half that time.

The last three years, she won state titles through the Michigan Wrestling Association. This season, a girls wrestling tournament was sponsored by the Michigan High School Athletic Association, so Bommarito got the chance to perform in front of a much larger crowd that in previous years.

Frisbie (7-1) made Bommarito work a bit. None of the previous postseason matches in her career went beyond the first period, but this one lasted nearly two.

“I rely a lot on my upper-body strength. I always get discouraged when I get in a match and I don’t have that (advantage). But that’s definitely something that I have the majority of the time,” Bommarito said. “Going to that second period, I was like, ‘She’s pretty good. It’s going to work up my cardio a bit for this match, so I’ve got to start relying on cardio, too.’

“This is great. It’s like the first time in history for women (to wrestle alongside the boys at the Finals), in at least Michigan. I feel like I can encourage more females to want to join wrestling.”

Hicks earned her third state title in as many high school seasons with the hard-fought victory over Pyrzewski.

Hicks picked up wrestling as a second-grader nine years ago.

“I know that I’ve put in more work than anybody else. I live on the mat, I feel some days. I trust in my coaches and my hard work,” she said.

“This just felt amazing to be recognized by so many people as being equal as the guys who wrestle. Having this opportunity, it’s just amazing.” 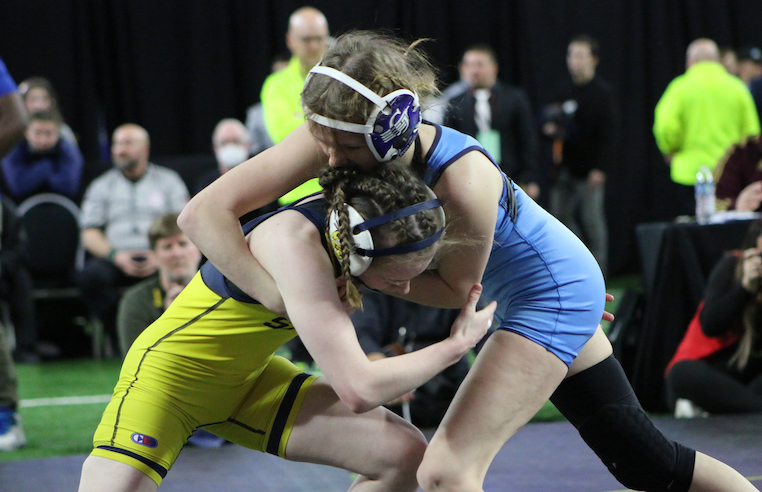 In the lone Finals match pitting two freshmen, Langewicz shook off some nerves and recorded a hard-earned victory.

Langewicz said she’d been preparing all season for this moment, and once she scored a takedown, the rest took care of itself.

“It was scary at first – I was pretty nervous, but as soon as the whistle blew, the nerves went away and I just felt in the moment,” she said. “The whole world disappeared, and I didn’t feel like there was any pressure. It felt amazing.”

“I worked hard, I put in the work, I did what needed to be done,” she said. “I did what (most) people weren’t willing to do: Staying after practice, practicing on weekends, working one-on-one with coaches and my dad and stuff. Just working hard.

“I didn’t waver. I knew it was going to pay off. I knew that if I worked hard, it would beat anyone’s talent when they didn’t work hard, so I knew I would come out on top.”

Buurma trailed later in the match against Vickory but said she kept fighting to pull out the victory on the big stage.

Buurma said she’s been wrestling since she was 3 or 4 years old, but this environment was different than anything she had ever experienced.

“The experience was definitely amazing – one of the greatest things I’ve ever done,” she said. “It was very nerve-racking going out there in front of all the people, but in the end it’s the same rules, same mat.”

Pena believes that wrestling against boys helps her when it’s time to take the mat against a girl. At the same time, she’s very proud of the fact that girls now have an equal platform as boys at the Finals.

“It really means a lot to me,” said Pena, who won a second-straight state title. “I know a lot of my girl wrestling friends say the same thing because you used to hear boys say, ‘Oh, girls wrestling is so easy. I could totally win that.’ We get the same chance as guys do.”

Palise knew she needed a takedown and nearfall to pull out the victory. Achieving her goal in front of a large crowd in the big venue made it all the more memorable, she said.

“It was awesome – like, the whole stands, everything,” she said. “It made it more meaningful that everybody could come, that I knew that were supporting me.”

At several moments during her Finals match, it appeared Swanigan could have given up. Her shoulder joints were bending so much, it seemed as though they were made of rubber bands.

“I’m a varsity cheerleader,” the flexible Swanigan said in laughter after her dramatic, extra-time victory.

Swanigan bent but didn’t break. The moment she scored a takedown in the extra period, she realized that she’d realized a dream.

“Definitely the thoughts of winning my first state title. … I definitely wanted this really bad,” she said.

Swihart said she picked up wrestling in second or third grade. All the hard work paid off.

In her first Finals appearance, Swihart captured the championship and did so on the biggest stage the girls have been on.

“Oh, it was just glorious,” she said. “I mean, coming out here, working so hard during the season, having the opportunity to be in the Finals, let alone first time in girls history and at Ford Field, it was just an outstanding feeling.

“And if I could, I would play it over and over again,” she added with a chuckle.

Pendell is Montague’s first girls wrestling state champion, and she’s also her school’s first Finals champ in the sport since 1989.

She placed seventh in the state last year, when she dual-sported in wrestling and basketball during the winter.

“My main reason for (picking up wrestling) was college opportunities, but after like two years, I just fell in love with it. Now, I can’t imagine not doing it,” she said.

Rebisch admitted to feeling a little pressure with so many eyes on her during her Finals match against Elsemann. She knew when it was time to turn the pressure up on her opponent, however, and she scored a pinfall late in the second period.

“Definitely, there was so much more mats here – probably like five times as many mats as there was last year. Big stadium – a lot bigger stadium,” she said. “It felt a lot louder. In some ways, it felt like more pressure, probably because so many people were watching. I was excited.”

A lot was riding on the Finals match for Krauss – more than the title.

Krauss got both. Previously, she had lost twice to Manuel, including in last year’s state finals tournament. This time, she left no doubt.

“It was just amazing. I’ve lost to her twice so far and just to know that I can beat her and I can be a girl that gets 100 wins, it’s just amazing,” the emotional Krauss said. “I’m just so grateful right now.”

On Friday, Nauss became the first girl to win a match at the MHSAA’s first Finals tournament.

On Saturday, she finished the job in a big way, earning a victory over Williams to cap a memorable weekend and season.

“This weekend was so special. This will be a weekend I’ll never forget in my life,” Nauss said. “It was great – it was great to be out here and prove that girls can wrestle just as hard as guys can and that we’re just as equal as they are and we should be on the mat alongside of them. This was so special.”

Garrett could not have imagined finishing her high school wrestling career in a better way.

Sure, she won her second state title in three years, but this one felt so much bigger.

“Well, first, the crowd size. And then also being able to be seen next to the guys, seen as equals, is definitely a big difference,” Garrett said. “I had people when I won (two years ago) didn’t say anything and then now even qualifying, they feel obligated to congratulate me, so that’s a big difference.”