And for the Macomb Dakota wrestling program, its beginnings can be traced to a church in Mount Clemens nearly 25 years ago.

Ed Skowneski, a longtime educator in Macomb County who was a football star at Wayne State University during the 1970s, got with a few buddies and formed a youth wrestling program named the Bad Boys Wrestling Club.

This program would eventually produce six MHSAA champions and approximately 20 others who reached the Individual Finals. It also helped inspire two of those wrestlers to become coaches at the high school level.

Before the Bad Boys – which would eventually evolve into Team All Sport – there were pockets in the county where the sport thrived, such as Fraser High where Al Kastl had built a strong program. But for the most part, Macomb County was a step or two behind nearby counties such as Genesee, Lapeer, Oakland and Wayne, where the sport had well-established programs like Clarkston, Davison, Detroit Catholic Central, Hazel Park, Lake Orion, Montrose, New Lothrop and others.

“We had some good kids back then,” Skowneski said. “We had six state champions come out of there. We practiced twice a week at the church, but it was more like a hall or reception room. After one year we moved to Fraser, Mark Twain Elementary (School), where I was a principal. That made it easier, for travel and everything. We had our own mats in the school, and it started to grow.”

A team from Macomb County has yet to reach an MHSAA Division 1 Final, but they’re getting close. Last season Dakota reached a Division 1 Semifinal for the first time, and it was just the third time a Macomb County team had advanced that far in the top division/classification.

Two other county schools fared well last season, too, in other divisions. Warren Woods Tower lost in the Division 2 Final to Lowell, and Richmond won the Division 3 title.

Skowneski’s motivation to become a coach came from his son, Eddie, and, later, his nephew Anthony Biondo, Vince Biondo’s son. Eddie Skowneski got his start with the Bad Boys at age 9 with his cousin who is two years younger. The two became best friends and would become two of the county’s top wrestlers during the early to mid-2000s at Clinton Township Chippewa Valley.

Each would reach the Individual Finals three times. In 2003, Skowneski won the 140-pound title over fellow county wrestler Justin Petrone of Roseville, 1-0. Biondo was a three-time champion placing first at 103 in 2003, first at 112 the next season and first at 145 in 2006.

Skowneski would earn a scholarship to Michigan State University, where he was a three-year starter. Biondo went to University of Michigan and was a three-time NCAA Tournament qualifier. His best season came as a senior when he went 2-2 at the NCAAs and earned his 100th career win.

“Those Bad Boys days, those were some great times,” Anthony Biondo said. “It was a great group of kids. I just remember being in that church with Uncle Ed. I really wasn’t into wrestling when I started. I was into hockey and football. I started going there one day a week, and it just grew. My first year wrestling (at Chippewa Valley), I won the state title. It was just that one-on-one thing that I liked. My dad was a huge goal-setting type of guy, and I just kept at it.” 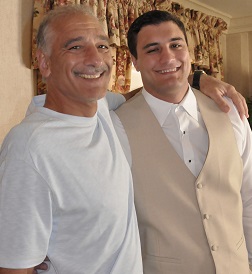 Eddie Skowneski, 31, said he’s had a number of mentors throughout his wrestling career who have contributed to him becoming the coach he is today. His father is one, but he also said his high school coach John Jeffire at Chippewa Valley, St. Clair Shores Lakeview football coach Pat Threet and his college coaches all have had their influence.

When Ed Skowneski retired as school principal at Mark Twain in 2015, his son quickly found him a part-time job as his assistant at Dakota to keep him active.

“He’s always been a great coach,” Eddie said. “Coaching with my dad, it never really stopped. With him, it’s the little things. He always said, if you have good technique, you can beat someone who is more physical than you are. With my dad, he goes to each person and shows them the proper technique. With me, sure I want them to work and train hard. But I want my wrestlers to do it the right way.”

Ed Skowneski got out of coaching when his son went to high school. He said he had taken his son as far as he could and that it was better to have Eddie continue his progression with someone else as his coach.

Now that Ed’s back in it, coaching with his son no less, he couldn’t be happier.

“When he first got the job at Dakota, I thought of helping him but I just didn’t have the time,” Ed Skowneski said. “I’m enjoying it now. I’m not the head coach. He has the issues. I just work with the kids. It’s fantastic. It’s rewarding. We have a great group of kids and good parents.

“I look forward to the tournaments, which sometimes keeps me up at night. It’s nice that my son and I can do this together.”

PHOTOS: Longtime coach Ed Skowneski stands with son Eddie (left) and nephew Anthony Biondo after a youth event when they were children. (Middle) Father and son hold up Eddie’s bracket sheet after he won the Division 1 championship at 145 pounds in 2006; to the right, they pose together during Biondo’s wedding. (Below) Ed Skowneski and Biondo, also before the latter’s wedding. (Photos provided by the Skowneski family.)