KALAMAZOO – Alex Facundo’s wrestling career has taken him around the country and across the Atlantic Ocean, and long ago into consideration as one of the top high school wrestlers in the nation regardless of weight class.

But there’s no way this week doesn’t remain a cherished memory even after Facundo leaves for Penn State and encounters more higher-level opportunities that surely lie ahead.

On Tuesday, he led Davison to its first Division 1 team championship since 2006. On Saturday, returning to Wings Event Center, he capped his Cardinals career by becoming the 30th four-time individual champion in MHSAA Finals history.

“I just treat it like another match. But then I realized the specialness of it. Before I even looked over, I heard all the cheers and stuff,” Facundo said. “I mean, I’m going to miss this a little bit.”

“This week has been the best moment, the best week of my high school career,” Facundo said. “Not only winning the fourth (individual title), but winning the team state title that we haven’t won in 15 years. That’s just special. That’s never going to leave us. That’s never going to leave my name – they’re going to hear four-timer, but they’re also going to hear the 2021 Davison wrestling team.”

He reached this title match with a pair of pins and a technical fall before handing Weiand his only defeat of this season.

“Nothing really compares – it’s been honestly one of the best weeks of my life,” Gates said. “I’m just hoping I can follow in (Facundo’s) footsteps. Obviously, Josh Barr just won his second next to him, and after that Jimmy Colley got his first. So, it’s a special team we’ve got here.”

DCC junior Anthony Walker and sophomore Clayton Jones finished fourth and sixth, respectively, at 119 on Saturday. They also received assists for training Heethuis up on the way to his first Finals championship.

“It’s pretty much all the difference – being able to have good partners and good people to work with and go against, it’s a main factor in being able to be good and get to the next level,” Heethuis said.

After finishing third at 103 last season, Heethuis did take those next steps with a perfect run.

“It’s kind of expected. I just want to get where I can be at the best I can,” he said. “This is what I’ve been working for my whole life.”

These two also met in the 103-pound championship match last season. The result was nearly identical this time after Horwath had won the 2020 bout with a 7-2 decision.

He reached Saturday’s finale with two pins and a major decision.

“(I was) just working hard, pushing my pace, making sure I get to all of my attacks,” Horwath said. “Not worrying about what they were doing, just try to wrestle my match and how I want to.

“Not too much (was different this season) – just getting better and better, critiquing little things.” 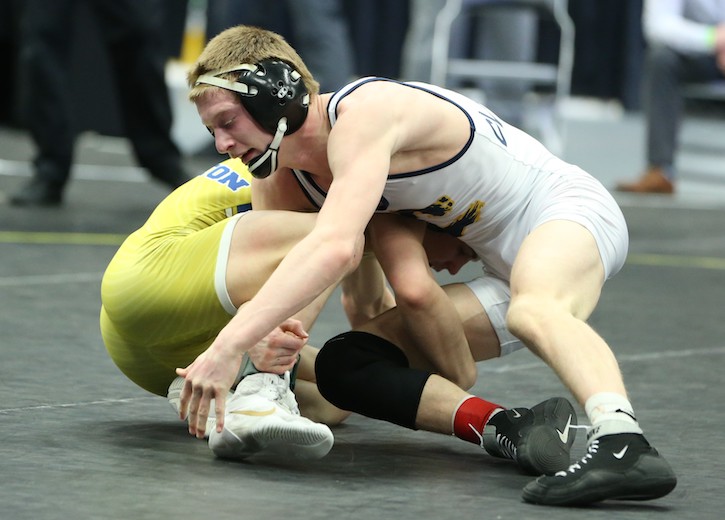 The last conversation Anderson had with his late grandfather Pete Vandermeer was about making weight. That was only a couple of years ago, and Anderson knew he was watching Saturday – “I wanted to do it for him,” Anderson said. “He’s smiling down at me.”

It surely was a proud family moment, as Anderson not only avenged a 5-1 Regional loss to Hampton to defeat the top seed this time, but in the process became the sixth member of his family to wrestle in an MHSAA Final and third to win a title for Clarkston – joining uncles Jerry Anderson (1993), Matt Vandermeer (2011) and Nick Vandermeer (2013).

Ashton also was thinking Saturday of last season’s Finals, when he fell in his first match at 125 by a 13-11 decision, then fought all the way back to finish third.

“I was supposed to be in the Finals last year, and I lost early and didn’t get to make it, and it’s my last chance,” Anderson said. “I wasn’t letting it slide by.”

The joy was all over Ferretti’s face as he finished his high school career by joining the short list of three-time Finals champions.

“It was honestly about having fun, because it’s my last year … and honestly just trying to get through the year with all of this COVID stuff,” Ferretti said. “We only got half a season to train for this, so it does feel pretty good, knowing that I’m winning because I worked hard in the room and stuff like that. It all pays off. Now it’s time to take it to the next level.”

Ferretti will be wrestling next season at the U.S. Naval Academy.

These two met to close Davison’s Team Finals win on Tuesday, with Gilcher winning 5-2, and the rematch was even more low-scoring.

But Gilcher scored enough and also his second championship, adding to the title won a year ago at 112.

“I wrestling him twice earlier, so I knew I could get a takedown. I wasn’t as busy as I like, but I was in control. I felt safe,” Gilcher said. “I rode this time – last time I didn’t ride – so I got less points. But like I said, it was safe.”

Shrader had been all around a championship his first three seasons, finishing sixth at 103 as a freshman, eighth at 119 as a sophomore and second last season at 125.

In his final high school match, Shrader arrived and earned a spot at the top of the podium.

After falling in that 2020 championship match, Shrader made a deal with himself that he wouldn’t lose this time. He hardly slept Friday night thinking about the opportunity.

“I’ve been working so hard since last year, since I lost in the Finals,” Shrader said. “The past three years, my mindset was nowhere near where it is right now. I wanted it so bad, and I just put my mind to it and got it done.” 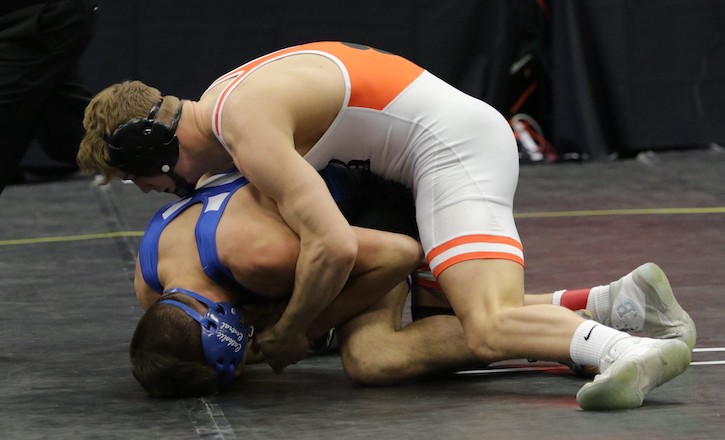 Very rarely, the Individual Finals pits teammates against each other. Marines and Trupp met in the championship matches at every level of this tournament, with Trupp winning 3-1 at the District and Marines taking the Regional 5-2.

“First one I was a little nervous, you know, (facing the) senior captain,” Marines said. “Second time, I knew what I was expecting.”

This time? “Nerves, everything. I was just thinking about standing on that podium and getting that trophy. That’s all I had in mind.”

During Tuesday’s Team Finals, Marines bumped up to 152 while Trupp wrestled at 145. Combined they finished 5-1 that day winning with three pins, a tech fall and a decision.

The final minute was ticking down and Wachter was a few points behind, a runner-up finish shaping up as the likely result.

In an instant, everything changed.

“I just felt his head, way too high, took it over, pinned him,” Wachter said. “I get in that position a lot in practice, so I’m used to it.”

Moments after Facundo won his fourth championship, Barr reached the halfway point in pursuit of the same – and with a second-straight undefeated season.

“I love this man right here; he’s my training partner every single day,” Barr said as Facundo offered a quick congratulations. “That’s the person who trains me for every single situation to help me out on any mat I ever step foot onto.”

Barr will be among those who will be looked toward next, especially as Davison returns next season as the reigning team champion.

“Just keeping the momentum going,” he said. “On Tuesday we just won a team state title, and it was a great thing to do with my brothers. Keep winning team state titles, keep winning individual titles. Break some records here. … Keep pushing the pace.”

Cotton was the top seed and Rojas the second, and they reached the championship match with a combined five pins and a tech fall.

Rojas also was the reigning champion at this weight, and now he’ll head into his final season with a chance to join that three-timer list.

“Nothing’s different. Just getting to come out here and do the same job,” Rojas said comparing this season’s run to last. “Same job every year.

“Maybe getting to train a little bit harder every year. Get a little better. That’s it. Just getting better.”

Colley was one of six Davison top seeds entering Saturday, after finishing fourth as a freshman and third last season both at this weight.

“Nothing better than as a team having that bond, winning together, everybody excited, coming here excited, ready to wrestle. Everybody came here to win,” Colley said. “We all grew up together. Everybody knows each other, practice partners. It’s just great to know you’re practicing with the best guys in the state.”

He added a first place to his list with a quick pin, becoming Davison’s third champ of the day.

“I went out there pretty quick, took him down, got to my underhook, where I know I’m good there, got my takedown,” Colley said. “My goal was to go out there and dominate the match.”

Roy will not be soon forgotten by Jackson wrestling. And he’s hopeful what he accomplished Saturday helps the program for years to come.

“I’ve always known I could do it. I’m glad I finally did,” Roy said. “I thought it was going to be last year. I lost to Nick (West of Lincoln Park) in the second round, came back (and defeated him), took third. I knew I was winning it this year. I wasn’t going to let anybody stop me.”

He’s also hopeful his championship run will spark the sport at his school.

“It will encourage people to come out and try it,” he said, “get some better wrestlers in there next year.”