DETROIT – It was fitting that Josh Barr versus Manuel Rojas was the last bout of the night at Saturday’s Division 1 Individual Wrestling Finals, because that’s the match everyone was most excited to see.

Two of the best in the country at 171 pounds, with a combined four state titles between them, Davison’s Barr emerged victorious with a 5-2 win over Detroit Catholic Central’s Rojas, with all eyes on them.

“This is what I’ve been talking about for a long time. I couldn’t wait to be part of something like this. Practically main eventing the state championships against one of the best wrestlers in the state, it’s amazing,” Barr said. “Having all these people around watching, it was awesome.”

Rojas (37-3) managed an escape in the first and another in the second to even the match at 2-2. Barr would answer with an escape to start the third and then drive home the win with a takedown in the final minute to earn his third title.

“It means a lot,” Barr said of his third championship. “It means what we’re doing is right, it’s working. Going to bed early, waking up early, eating clean. It all adds up.”

Rojas had just two losses in-state during his senior season, both coming to Barr over the last eight days. Barr edged Rojas 4-3 in last weekend’s Division 1 Team Final while leading Davison to a 29-21 victory.

“I think it just shows my character. I got right back to it last week. Winning that team state title was cool, but as soon as I got in my car, it was over,” Barr said. “I started training again right away. I knew (Rojas) was going to be sitting here waiting for me, so I got right back to it.”

In a thrilling finish, McAlary scored a takedown in sudden victory to hand Wilson his only loss of the season.

“I knew going into this match that I had to take (Wilson) into deep waters to win this match,” McAlary said. “Heading into overtime, my coach told me this is right where we wanted to be. I knew I had it.”

The first two periods were scoreless, but McAlary got a takedown in the third to counter a pair of escapes from Wilson. It then came down to a quick takedown from McAlary in OT to earn the state title.

“I still can’t believe it,” he said. “The goal is always to win, but sometimes you can’t really wrap your head around it even after you win. I don’t really know what to feel. It’s wild.”

After suffering his only loss of the 2021 season in a championship match, Weiand was determined not to suffer the same fate this year.

“Losing in the state finals was the worst feeling I ever had. I didn’t want to experience that again,” Weiand said.

His takedown in the first period proved to be the difference, as he held off a game Lopez over the final minutes.

“I just had to stay tough,” Weiand said. “I knew I could ride him out for most of the period. I feel very confident on top.”

In a match that featured a pair of 2021 champions, Heethuis scored a takedown in the first period and a reversal in the second to secure his second title.

“It’s awesome. I had a couple of bumps in the road earlier in the year, and I wasn’t in the right mindset,” Heethuis said. “Over the past couple of months, because of my coaches, I was able to dial it in for the last half of the year. It feels great.”

The two met in last week’s Division 1 Team Final, with Heethuis grinding out a 2-1 victory over Gates.

“We wrestled last weekend and I knew it would be a tough match this time, too,” Heethuis said. “I knew that if I was able to get into a good attack in the first, it would be key.”

Horvath earned his 100th career win and locked up his third championship while also capping his second-consecutive undefeated season.

“This one means a little more,” Horwath said of his third title. “We had some team adversity this year, so it took a lot of hard work by the team to get everyone at their best.”

Horwath scored two takedowns early in the first period to set the tone and never trailed in the match.

“Honestly, I just wanted to have fun and score some points,” Horwath said. “It was a nice environment, being able to wrestle in front of my family and fans.”

Jones secured his first championship with a dominant effort at 130 pounds, earning a 9-2 win over the top-seeded Bunn.

“I’m just thinking that all the hard work that we’ve been putting in got (me) the state championship,” Jones said.

Jones came out aggressive with an early takedown in the first and added two more in the second to keep in control.

“I made sure to get the first takedown,” Jones said. “I came out the gates and just kept going at him, going at him.”

Smith added his name to Brighton’s championship history with a hard-fought win.

“I have waited for this for a very long time,” Smith said. “I had previous teammates ahead of me that won state titles, and that was a lot of pressure on me. I just feel like all of that pressure has been lifted.”

Smith never trailed, as he scored the opening takedown and sprinkled in a few more throughout the bout.

“I knew the match was going to be tough. I just had to wrestle all six minutes hard,” he said. “I felt like I was getting into my attacks really well, and I just kept chain wrestling. I was really happy with my performance.”

A quiet and composed Gilcher won his third championship at a third different weight class Saturday.

This Finals matchup was a rematch from the 135-pound final in 2021. Gilcher won that 3-0. These two also met in last weekend’s D1 Team Final, a 7-5 victory for Gilcher.

“I had him last week and last year. I’ve been wrestling him since we were little, growing up. He was always kind of bigger than me, so he could beat me up a little bit,” Gilcher said. “It feels good.” 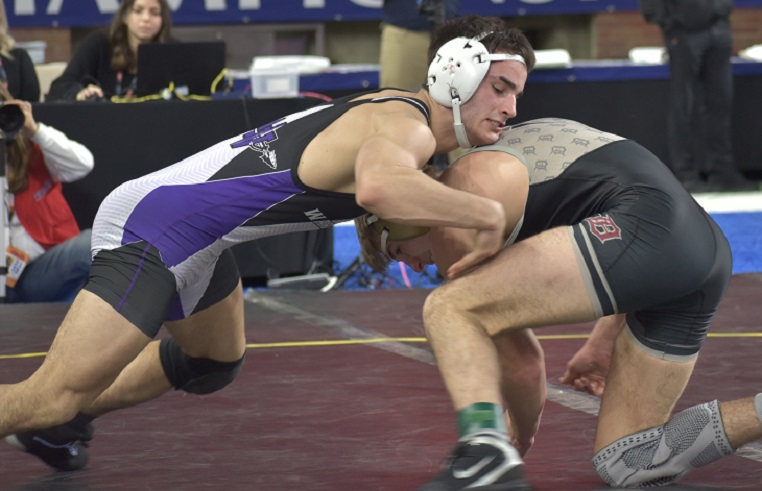 After seeing previous title bids ended prematurely by injuries and the pandemic, Jerore now can call himself a Finals champion.

“I literally can’t believe it. I wanted it so bad. It’s been taken from me for so long,” Jerore said. “Injuries and COVID, it’s been crazy, but I just kept working toward this goal.”

Jerore scored four takedowns in the match and was relentless on his feet against Payne.

“I knew he was going to be tough, but I knew that if I was as tough as I can be, anyone that I wrestled I could break,” Jerore said. “That’s what happened.”

For the second consecutive season, Marines had to face a teammate in a championship match.

For the second consecutive season, Marines came out victorious.

“It’s unfortunate, but it had to happen,” Marines said of facing a teammate in the final again. “(Bunn) was one of my best friends on the team. It kind of hurt. But, I had to set all that stuff aside.”

The match didn’t have much action. Marines rode out Bunn in the second period and then earned an escape in the third for the lone point.

“I felt pretty good (after the second period),” Marines said. “I’ve worked my whole life for this, so it feels pretty good (to win).”

A takedown in the closing second of the third period broke a 1-1 tie and gave Denker his first championship.

Mirjavadi got an escape in the second to take a 1-0 lead, and Denker answered with an escape of his own to start the third. He then turned up the heat late in the match to earn his title.

“I knew late in matches, we all get tired, but I knew (Mirjavadi) would be the exception, so I had to keep going and eventually I just got him,” Denker said.

Cotton got a takedown early in the bout and built a 5-1 lead in the second period before hanging on for the victory.

“I’ve trained for this my whole life,” Cotton said of the win. “Being able to come out here and get it done just feels amazing.”

Along with his first championship, Cotton also avenged a prior loss to Wardell to cap off his season.

“I practice every day to win every match,” Cotton said. “If I lose one match, I just look forward to the next one to be able to move that to the past.”

Colley collected his second consecutive championship at 215 pounds in a wild scramble of a match.

The two contenders traded position often, but it was Colley who found himself with the advantage more consistently. He led 8-5 after two periods and then handled his business in the third.

“We both had that same funky style, and we always put on an exciting match,” Colley said. “You never know what (Dickerson) is going to do. It looks like we are just rolling around sometimes.”

After finishing runner-up in 2021, Terrill grinded his way to a championship.

“I just kept telling myself to not be content. I wasn’t content, and I just won a state title,” Terrill said.

After a scoreless opening period, Terrill turned up the aggression and scored a pair of takedowns in the second period to take control. He credited his coaches for his strong finish.

“This means a whole lot to me, but this really goes to my coaches,” Terrill said. “None of this is about me, it’s about the coaches that got me here.”