MOUNT PLEASANT – It took 14 matches and eight steps through the dual meet tiebreaker criteria Saturday to decide the latest edition of the wrestling rivalry between Richmond and Dundee.

But when Criteria H showed a 17-8 advantage for Richmond in total first points scored, it was Blue Devils coach Brandon Day who turned to his team with a triumphant fist in the air, sending the Richmond wrestlers and crowd into hysterics.

“I walked to the table and (Dundee coach Tim Roberts) told me, ‘You already won,’” Day said. “I told him, ‘We’ve got to quit doing this.’”

Richmond prevailed in the back-and-forth Division 3 title match, which ended tied at 28 following a 4-3 win from Richmond 130-pound sophomore Hayden Bastian. The title is Richmond’s eighth, and first since 2015 when it defeated Dundee in somehow less dramatic fashion with a pair of pins in the final two matches.

The two teams were deadlocked through the first seven criteria, which includes three varieties of penalty points assessed, total matches won, pinfalls, technical falls and major decisions. It was fitting for a rivalry that has dominated Division 3 since 2006, with the teams now having combined to win 10 of the last 12 titles -- Richmond with six and Dundee with four. Of those 10, seven were won against the other.

The dual was tied three times over the final five matches -- 22-22, 25-25 and 28-28. The final tie was forced by Bastian, who recorded a takedown with less than 30 seconds remaining to send the match to the scorebooks.

“I was stressed -- I was so nervous that I wasn’t going to get a takedown,” said Bastian, who didn’t know if his win would give his team the title. “I’m fairly new to the sport. I started wrestling in seventh grade. I don’t really know much. My first match I didn’t really know what I was doing. I don’t know almost anything, I just go out there and wrestle my best.”

Bastian’s coach had plenty of confidence in him before sending him out onto the mat. 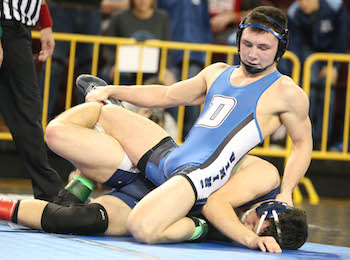 “Hayden Bastian is the best kid in the state nobody knows about,” Day said. “He made 130 for the first time here this weekend, and that was the difference.”

Dundee jumped out to a 22-9 lead in the match, getting pins from Sean Sterling at 160 pounds and Brandon Whitman at 189, a major decision at 145 from Tylor Orrison and decisions from Zachary Bellaire at 140 and Kyle Motylinski at 171.

Even with the lead, however, Roberts didn’t feel safe.

Richmond stormed back to tie the dual with a major decision from Colton McKiernan at 215, a decision from Tyler Marino at 285 and a pin from Austin Kilburn at 103.

Kilburn’s pin ended a wild match against Dundee’s Caleb Fairchild, which saw both wrestlers taken to their backs in the opening period. Kilburn, a freshman, regained his composure and scored seven more points before getting the pin with 41 seconds left in the match.

Costello’s win put the Blue Devils up 25-22, but Daniel Jaworski (119) and Christian Killion (125) each won decisions for the Vikings to give them the 28-25 lead heading into the final match.

Richmond opened the dual with a pin from senior Owen Vannatter at 135 pounds, and after Dundee took a 7-6 lead with its wins from Bellaire and Orrison, Richmond sophomore Eric Barr pulled off an upset at 152 with a 3-2 win against Dundee’s Alex Motylinski.

“Eric Barr!” Day shouted. “Eric Barr knocked off No. 3 in the state. (Barr) didn’t make it out of our Regional. That was huge.”

PHOTOS: (Top) Dundee (left) and Richmond faced off Saturday for the eighth time over the last decade of Division 3 Finals. (Middle) Dundee’s Sean Sterling works toward a pin during his match at 160. (Click for more from HighSchoolSportsScene.com.)